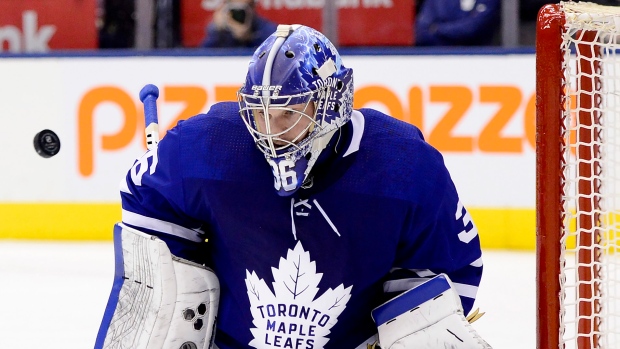 TSN Toronto Reporter Mark Masters reports on the Maple Leafs, who skated in two groups (optional morning skate, full practice) at Ford Performance Centre on Monday ahead of their preseason game against the Senators in Ottawa.

After setting the franchise win streak record and making his Stanley Cup playoff debut last season, Jack Campbell is looking to take another step in his development.

"It was great to get experience in the playoffs and playing a little more consistently," Campbell said. "Ultimately, I've had that confidence for a little while now, but just keep building on different opportunities."

With Frederik Andersen sidelined with a knee injury, Campbell emerged as the go-to guy for the Leafs down the stretch last season posting a 17-3-2 record and .921 save percentage. Campbell, who has never started more than 26 games in any NHL season, learned to handle the ups and downs associated with a heavier workload.

"There were glimpses, a couple games here and there, that I didn't like, but the way I responded was exciting and being able to turn that page," he noted. "This year I'm looking to do that, but even quicker."

"Last season was really part of a coming out for him in terms of solidifying himself here," said coach Sheldon Keefe. "I know he's not satisfied with what he had last season and I know he's going to push to get better and that's what you love to see."

Where is Campbell looking to improve?

"Just a few areas of my game and hopefully you'll notice when the success comes in," he said.

The Michigan native refused to reveal anything more than that.

"I'll keep it between [goalie coach] Steve [Briere] and I, sorry."

Campbell is a beacon of positivity in the dressing room. He'll often promise teammates a Red Lobster dinner for playing well in front of him.

During the 1996 Adam Sandler comedy blockbuster, one character tries, unsuccessfully, to get another character to go to Red Lobster.

"When that one guy says it, it's pretty funny," Campbell continued. "I've ordered it a few times and took a picture and sent it to a couple of the guys and they said it was funny."

"I kind of want to get maybe a team dinner there or something so they can really try it while it's hot and fresh," Campbell said. "They kind of think I'm joking, but it's really good."

"I don't know if I'm a big Red Lobster guy," said Auston Matthews with a smile, "but, I mean, I'll follow Soup anywhere so I'll come for the fun and the laughs."

"Anything Jack organizes, I'm down for," said William Nylander.

---
Matthews completed a full practice for the first time at training camp as he continues to work his way back from wrist surgery. The Arizona native wore a red sweater, but called that "precautionary." He didn't shy away from contact during the workout.

"I've just been itching to get out there with the guys," the 24-year-old centre said in his first media session since the opening day of camp. "Today was good, kind of getting into the corner with guys and feeling that pressure and feeling other bodies on you in the corner. So, feeling that and working through it, everything felt pretty solid so I was pretty happy with it."

Matthews says there would be a lot of value in getting into a pre-season game, but isn't sure if he'll be ready for Saturday's exhibition finale.

"Still kind of planning and hoping for that first game," Matthews said referencing the regular season opener on Oct. 13 against Montreal.

How about his shot?

"Ah, it feels all right," the reigning Rocket Richard Trophy winner said. "I'm still gaining some strength back in my arm and my wrist and stuff like that so it's not quite where I want it to be, but I like [how] it's progressing and where it's going."

There is some pain, but nothing to get concerned about.

"The slight pain I'll feel once in a while is from sitting around for six weeks and not being able to do much and obviously jumping back into it. It's not bad pain," Matthews said. "It's just kind of how it is when you come back from surgery."

---
Morgan Rielly has seen some low moments in Toronto. There was an 18-wheeler going off a cliff. There was Salute-Gate with sweaters thrown on the ice. And, of course, most recently, five straight painful playoff setbacks. And, yet, the 27-year-old defenceman remains romantic when it comes to his adopted hometown.

"It's all I've ever known so I'm happy here," said Rielly, who was picked fifth overall by the Leafs in 2012. "I love this city. This logo means a lot to me and I try and enjoy work every day, that's all. I'm no different than anybody else in that sense."

Rielly insists that being under the microscope in Toronto isn't an issue.

"My opinion of that whole thing is it's a little bit overblown," he said of the so-called fishbowl existence. "I feel like we're very lucky to play in this market. We have great fans and in terms of of people coming up to you, that's a cool thing that I've got to experience ... That aspect to it is really something I try not to take for granted. You try to enjoy it. I think it's pretty cool and I feel very lucky to be in that position. So, just try and enjoy it. There's definitely some weird stuff that happens along the way, but it's whatever."

This seemingly unshakeable positive mindset is why no one seems overly concerned about his contract situation becoming a distraction this year. The longest-serving Leaf is in the final year of his current deal.

"Nobody better, really," said captain John Tavares when asked about Rielly's ability to ride the rollercoaster of emotions in Toronto. "He's always been a guy that's been extremely levelheaded ... He does a great job of just kind of sticking to himself."
"He's just an extremely mature guy, very confident in who he is," observed Keefe. "My interactions with him have been very good or at least very normal. I think he's just approaching this like any other season and yet knows the urgency we have here as a group."

Rielly serves as an alternate captain and is an important sounding board for Tavares. In many ways, he's the institutional memory of the dressing room.

"Someone I rely on as much as anybody and someone I have a tremendous amount of respect for," Tavares said. "He's been here longer than anybody so he has a really good sense and feel for things and the group and the people we have and the evolution of where things are today more so than I do. He has such great awareness of things on and off the ice so, yeah, his leadership is undeniably big for us."

---
The last time the Leafs played in Ottawa, gritty winger Michael Bunting scored a hat trick and had his intermission interview crashed. Kurtis Gabriel snuck up behind Bunting, who was at the bench answering a question from TSN's Gord Miller, and called him "a greasy rat."

"Maybe the third day we were here training, I hit him in a drill and he wasn't too happy," Gabriel said with a smile. "He gave me a couple whacks and reverse hit me, almost knocked me on my butt ... You saw him [against the Senators] getting into everybody's grill, pissing people off and that's what we need on this team."

Bunting, for the record, doesn't mind the "greasy rat" label. He's always been an agitator.

"I'm sure he's been called that a lot," noted Mitch Marner, who faced Bunting in the Ontario Hockey League. "He's a guy who gets around the net and is not afraid to get in the dirty areas and score goals and not afraid to be hated by a lot of people on the ice. It's nice to have one of those guys on your team. I played against him in the O so I know what kind of player he was there and he's bringing the same kind of energy here."

LOL Bunting did the "Made you flinch" pic.twitter.com/KuI3vPcAVT

Bunting has scored in every game he's played at training camp, including Friday's Blue-White scrimmage. He's proving to be more than just a pain in the butt.

"He goes to the greasy areas," observed fellow Scarborough, Ont., native Wayne Simmonds. "I don't know if I'd call him a 'rat.' He's a pretty good goal scorer, if you ask me. I think he's been unbelievable."

Bunting's play has made him a top candidate to claim the vacant left-wing position alongside Tavares and Nylander.

"He's just really determined," said Tavares. "And, not just that, but has such good awareness of the game and how to play with good players and how to make an impact ... He's been kind of a late bloomer and someone who's had to prove a lot of people wrong and he's always had that attitude of finding a way."

Bunting, a fourth-round pick of the Coyotes in 2014, has a fan in Keefe, who coached him with the Soo Greyhounds.

"He made the OHL as a late-bloomer," Keefe said, "a guy that took a very unconventional route, especially here in the GTA, you know, played double-A hockey for a long time and undrafted until 18. He's just got a chip on his shoulder."

Bunting is 26-years-old and has only played 26 career NHL games.

"I never really doubted my ability," he insists. "I've of known I've been a late bloomer and just always believed once I got my shot I got to take it and run with it."

He did that last season with the Coyotes, scoring 10 goals in 21 games. Now, he's planning to do that with his hometown team. He left money on the table to sign in Toronto in July and shortly after the deal got done, Bunting posted a picture on Instagram of him as a kid wearing a Leafs sweater.

"It was a day at school when you could support your favourite team," he recalled. "My mom dyed my hair blue and put the stickers all over my face and put the jersey on and away I went."