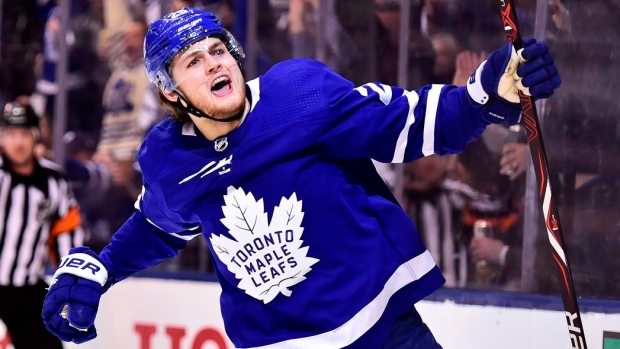 Paradise, N.L. – If you thought enduring a career-worst season and months of criticism might splinter William Nylander’s confidence in his game, well, guess again.

“There is no jump I have to make,” the Maple Leafs winger said defiantly on Friday, after the team’s first day of on-ice training camp sessions at Paradise Ice Complex. “I know what I’m capable of. We’ll see during the year.”

This time around, Nylander is at least giving himself a fighting chance to succeed. The 23-year-old missed all of the Leafs’ 2018 training camp and the first two months of the regular season in a protracted contract stalemate, which eventually ended in a six-year, $45 million extension with the club.

Nylander’s highly anticipated return to the ice in early December quickly became nightmarish as he managed to score only one goal in his first 23 games. By the end of the year, Nylander hadn’t even cracked double digits, ending his 58-game season with seven goals and 20 assists. Nylander added one more goal and two assists in seven playoff games.

Before breaking for the off-season, Nylander admitted he’d have to prove any detractors wrong, saying after last season’s performance, “I have to change their opinion and play the way I know I can.” He’s come to camp with renewed energy to do just that.

“I was joking around with him and said it must be nice to be back to about 196 pounds instead of about 5,500 like he was last year, when you’re carrying the weight of the world around on your back,” head coach Mike Babcock said Friday. “You’re a proud guy and you think that you’re good, and you want to be good but it isn’t going good and there’s nowhere to hide, so it’s tough.”

Babcock put Nylander back with his previous linemate Auston Matthews immediately last December, but the two failed to click like before, and Nylander was eventually shuffled into the team's bottom six.

Babcock has Nylander back on Matthews’ flank to open camp this year, and the centre couldn’t be happier with what he’s seen so far.

“You definitely see a hunger and a motivation in his attitude and his confidence,” Matthews said. “He’s a confident person to begin with, but obviously coming in this summer to training camp, he looks really good out there and seems like he’s extremely hungry.”

With Andreas Johnsson rounding out the Matthews line, expectations are already high internally for what that trio can accomplish out of the gate. Living up to those expectations will start with learning from past mistakes.

“We have another level for sure,” Matthews said of his chemistry with Nylander. “Our first two years together, we had some really good segments and were playing really well and had times where we weren’t playing well. So for us, it’s that consistency, and making sure that every night we’re coming and we’re showing up and we’re bringing our A-game.”

Nylander breezily describes what his top-level play looks like – “it’s dominating on the ice.” He hasn’t hesitated in throwing around that word with anyone who needs to hear it either, whether it be in the media or right to his coach.

“He said that to me the other day. He said, ‘I was dominant out there,’” Babcock said. “I said, ‘That’s great.’ I hope he’s dominant when it drops on [our season opener] Oct. 2. I don’t mind watching dominant.”

With a clearly established goal in mind for his on-ice performance, Nylander has also taken some time out to cultivate a mentoring role with some of the Leafs’ younger players, most specifically defenceman Rasmus Sandin.

The two Swedes have been inseparable since the Leafs' informal workouts began in the lead up to camp, often staying out after scrimmages for more individual work.

“Sandin was skating with me in the summer [back home] and I’ve been his driver in Toronto,” Nylander said. “So I’ve been taking care of him a bit.”

Next on Nylander's agenda will be taking care of business on the ice, and re-establishing the player he, and the Leafs, believe him to be.

“It’s great to be here,” Nylander said, surveying all that he missed from the training camp scene a year ago. “You get into the rhythm of the game, the systems and you’re playing [preseason] games here. And then you’re going right into the season [ready].”