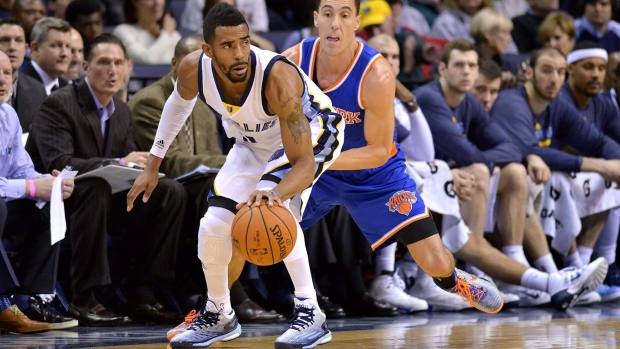 MEMPHIS, Tenn. - Mike Conley knew how important it was for the Memphis Grizzlies to start the second half aggressively against the depleted New York Knicks.

After injury-ravaged New York stayed close in the first half, and even took a brief lead, the Grizzlies pulled away and handed the Knicks yet another loss.

Conley scored 14 of his game-high 22 points in the third quarter, and the Grizzlies beat New York 105-83 on Monday night, sending the Knicks to their record-tying 12th straight defeat.

"It was very important we didn't come out and ease into the (third) quarter," Conley said. "We really took it upon ourselves to come out and play team defence and play aggressive defence."

Tony Allen forced four of his game-high seven steals in the quarter to pace the defence, which forced nine turnovers in the period.

"Tony got going with all those steals, and that always sparks us a little bit," Conley said. "Guys were also making shots on the offensive end and we were getting layups."

The Grizzlies led by 11 at the half and pulled away in the third quarter behind Courtney Lee and Conley.

Lee scored all 11 of his points in the first seven minutes of the frame. Conley made both of his 3-pointers in the period, and the Grizzlies built a 22-point lead entering the fourth.

New York played without injured starters Carmelo Anthony and Amare' Stoudemire. The Knicks were also missing J.R. Smith and Iman Shumpert, who were sent to the Cleveland Cavaliers as part of a three-team trade with the Oklahoma City Thunder.

Knicks coach Derek Fisher said the trade created a difficult pregame environment and even more challenges during the game.

"We had to make some adjustments in terms of things we could do offensively and defensively," Fisher said. "You saw us play some zone, which we hadn't done before.

"In some spurts it was effective, but overall, the nine guys that went out there, I thought they were trying their best. Memphis was the better team."

The Cavaliers sent reserves Lou Amundson and Alex Kirk and their 2019 second-round pick to the Knicks, who are desperate to clear salary-cap space.

"I can honestly say I'm not sure I've ever experienced it as a player where you're right before tipoff and a teammate is not right there with you," he said.

The deal forced guard Tim Hardaway Jr. to play small forward. He finished with 12 points on 4-of-14 shooting.

"It's tough," he said of the trade. "But you still have to go out there and give it your all and compete."

Allen and Marc Gasol added 14 points apiece for the Grizzlies, who rested their starters for most of the final period.

Grizzlies coach Dave Joerger said he found out about the trade about 12 minutes before tipoff, and adjusted his lineup and the matchups accordingly.

The Knicks fell behind by 12 in the first quarter, but recovered to take leads of 27-26 and 29-26 midway through the second after successive baskets by Calderon.

Calderon's 3-pointer gave the Knicks their first lead, and he followed with a 20-foot jumper on the next possession.

Tayshaun Prince had eight points in between, including six straight before Carter's finishing 3.

Memphis shot 45 per cent in the first half and 52 per cent for the game.

Grizzlies: Rookie forward Jarnell Stokes made his first career start in place of injured Zach Randolph and scored three points. Randolph missed his eighth straight game due to a sore right knee. Jon Leuer had been starting in place of Randolph. ... Memphis is 19-1 when outshooting its opponent. ... The Grizzlies (25-9) are off to the best start in franchise history.

Allen forced a steal midway through the third quarter and drove the length of the court for an emphatic dunk. He was fouled and made the free throw to give the Grizzlies a 68-51 lead.

Conley scored 22 points on 9-of-12 shooting and had seven assists. He made six of seven shots in the third quarter, including both 3-point attempts.

QUOTE OF THE NIGHT:

"I hated that. I was looking forward to that matchup honestly." Allen said about missing the opportunity to guard the traded Smith.