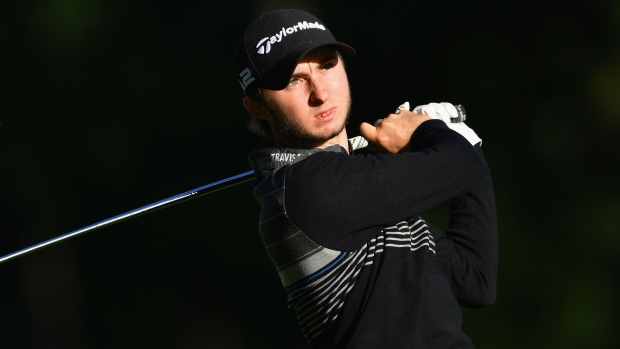 The Canadian ranks at the Open Championship doubled on Tuesday after Austin Connelly won a four-player playoff at a qualifier to earn a spot in the year’s third major.

Connelly shot a two-round total of one-under at Royal Cinque Ports golf course. He sealed his spot with a birdie in the playoff to advance to the Open at Royal Birkdale.

The odds of getting a spot were definitely not in the 20-year-old’s favour. It was just the second time playing a links course and, after arriving late the evening before, he saw just 10 holes of the course in a practice round.

Connelly is a dual citizen, holding both American and Canadian citizenship and has played for Canada in international events such as the Pan-Am Games. His grandparents are from Nova Scotia and he spent most of his summers in the Maritimes, honing his game on fairways there. He also spent time on Canada’s national amateur team.

However, Connelly makes his home in Dallas and grew up playing alongside Jordan Spieth. But Connelly plays with the Canadian flag beside his name and has stated he’s all in representing Canada.

After initially agreeing to play collegiate golf at the University of Arkansas, Connelly decided to turn pro at 18 and spent some time on the Mackenzie Tour – PGA Tour Canada last year.

This year, he took his game to the European Tour where he has been splitting his time between the main tour and the Challenge Tour, the developmental circuit that makes stops from Czech Republic to Kazakhstan.

On the Euro tour, Connelly has a pair of top-10 finishes and has risen to 513th in the world ranking after starting the year 879th.

He joins Adam Hadwin as the Canadian content in the field at the Open Championship.