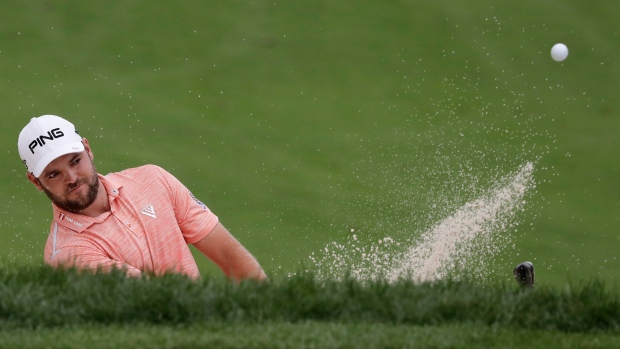 Corey Conners hits from a bunker during the BMW Championship. , The Canadian Press

A year ago, Corey Conners was teeing it up in the Korn Ferry playoffs, just hoping to earn back a fully exempt spot on the PGA Tour. This year, he’s heading to Atlanta for the Tour Championship, ready to collect a bucketful of big rewards including cash and major exemptions.

“It feels pretty awesome,” said Conners as he sat at O’Hare International Airport in Chicago awaiting his flight to Hartsfield-Jackson. “It was a goal of mine, kind of a long shot goal but I had a great season and if feels amazing to have made it to the Tour Championship. It’s really rewarding for all my hard work.”

Yes, it’s been a pretty good year for the Listowel, Ont., native, who got through a playoff in a Monday qualifier to earn his first win at the Valero Texas Open. He already had a runner-up finish at the Sanderson Farms Championship and parlayed those performances into spots in three of the four majors. By the time he cashes his cheque from East Lake, Conners will have earned more than $3 million.

A tie for seventh at the BMW Championship on Sunday pushed him to 23rd on the FedEx Cup standings and into the last tournament of the season. Just by virtue of making that field, he’ll earn a bonus of at least $395,000. He’ll also be in next year’s Masters, U.S. Open and Open Championship along with all of the World Golf Championship events.

His play will also likely catch the eye of Ernie Els, the International team captain for the Presidents Cup. Conners stated he hopes his continued good play will make it difficult for Els not to choose him.

For the Tour Championship, a new modified scoring system gives it a type of staggered start. The leader in the FedEx Cup standings, Justin Thomas, starts the tournament at 10 under. The rest of the field receives fewer strokes, with Conners getting just a single one, nine shots back of the leader.

“I don’t mind it, getting in there now,” said Conners of the scoring setup. “I feel like I’ve got nothing to lose. I feel like in the past for a person in my position it’s been nearly impossible to win the FedEx Cup. I’m not saying it’s any easier starting nine shots back like I will be, but it gives you a glimmer of hope knowing that if you play amazing golf you can ultimately get it done.”

Conners is the first Canadian to play in the Tour Championship since Adam Hadwin in 2017. It’s a reward for what have been a few years of hard work and fast learning. The 27-year-old is confident his game is ready to play with the best in the game, even if he feels he can continue to improve.

That starts this week in Atlanta with the Tour Championship. It’s been a long, rewarding year for Conners and thanks to his fine play; next year could be even better.