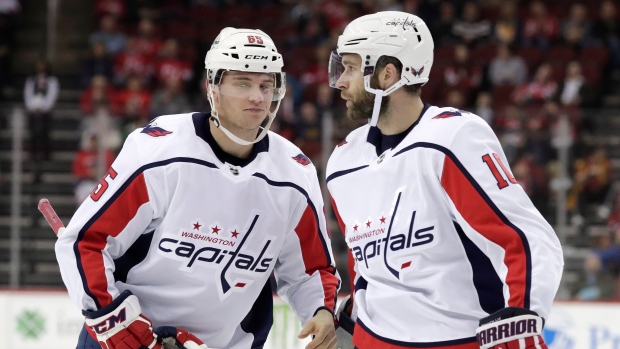 NEWARK, N.J. — Brett Connolly has been doing his best Alex Ovechkin imitation the past six weeks and it is coming just in time to help the defending champion Washington Capitals gear up for another Stanley Cup run.

Connolly sparked a three-goal second period and the Capitals moved into first place in the Metropolitan Division with a 4-1 victory over the New Jersey Devils on Tuesday night.

"I have been playing the best hockey probably of my career right now," the 26-year-old forward said after scoring his career-best 20th goal. "I just really want to focus on being good going into the post-season. We have a good team and we are right there again. We're getting close to the level we need to be at."

Since returning from the All-Star break, Connolly has 11 goals. The only other player on the Caps with that many is Ovechkin.

Connolly snapped a 1-all tie at 5:57 of the middle period, redirecting Christian Djoss' cross-ice pass into an open net past rookie goaltender Mackenzie Blackwood.

"I went right to 'Juicer' and gave him a big hug. He made a great play on the goal," said Connolly, who also said he would not attend the Capitals' White House trip on Monday in support of a player no longer with the team. "It's been a good season. We have a lot of good players and good guys. It's a good fit for me here and we'll see what happens in the future."

"Extremely consistent, confident, playing his best hockey," Reirden said. "He gets an assist as well. It was just a matter of time until he got 20. He has put himself in good spots to create offence and his mind thinks offensively, putting himself in dangerous areas. He's got a good shot and quick release and that will be key for us moving forward and having depth throughout our lineup."

Evgeny Kuznetsov and Tom Wilson also scored in the second as the Capitals won for the 10th time in 13 games. Andre Burakovsky got the other goal and backup goalie Pheonix Copley made 20 saves in winning his sixth straight since the All-Star break.

Washington started the day tied with the Islanders for first place in the division, but took over with the win and New York's 5-0 loss to Boston. The Capitals and Islanders each have nine games left in the regular season.

Kuznetsov gave Washington a two-goal lead at 12:16, beating Blackwood on a 2-on-1 break for his 19th goal.

Wilson got his 21st a little more than a minute later with his shot hitting off the rookie goaltender's pad and going into the net.

Nicklas Backstrom got his 50th assist on the play. The Swede is the only NHL player with 50 assists in each of the last six seasons.

Devils captain Andy Greene said all three goals were preventable. The first came off a faceoff. The second was an odd-man rush and the last one was a line rush.

"Against that team, that's their biggest strength, minus their power play, are the chances they create off the line rush," Greene said. "Just gift-wrapped three of them and that's all that team needs right there and they're able to lock it down pretty well."

New Jersey had tied the game with a second left in the first period when Agostino took advantage of a Washington turnover and beat Copley with a low shot to the corner of the net.

Burakovsky opened the scoring at 2:52 of the first with a perfect shot from the left circle to the upper corner of the net.

NOTES: The Capitals gave 38-year-old defenceman Brooks Orpik his first night off since Feb. 1. Djoos replaced him after sitting out the previous 10 games. ... Devils leading goal scorer Kyle Palmieri was hurt in the first period and did not return. ... Washington has not lost consecutive games since Jan. 22-23. .... Referee Jake Brenk was shaken up in the third period when a Capitals player crashed into his right knee. ... The Capitals are 16-6-2 against Metropolitan Division opponents. They have earned a point against New Jersey in 14 of 15 games (12-1-2).