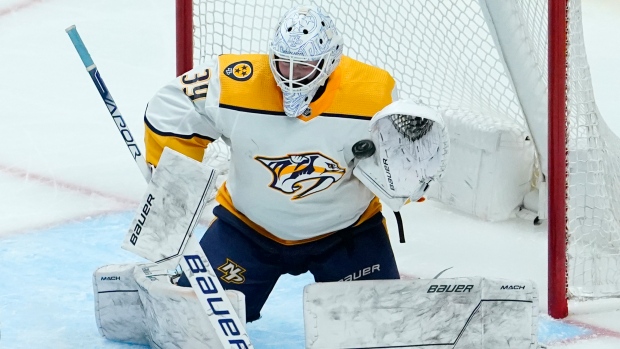 DENVER (AP) — The Nashville Predators will start goaltender Connor Ingram in Game 2 of their first-round playoff series against the Colorado Avalanche.

The Predators are without top goaltender Juuse Saros, who is sidelined by a lower-body injury. Coach John Hynes remains hopeful Saros could be back in the series.

“That's still a work in progress,” Hynes said. “I wouldn’t rule it out at this point.”

Ingram made three appearances for Nashville during the regular season. He became the second goaltender in team history to win in his NHL debut (Oct. 24 at Minnesota), joining the company of Pekka Rinne.

The 25-year-old Ingram spent most of the season with Milwaukee of the American Hockey League, where he notched 30 wins and five shutouts.

“We knew when Juuse wasn’t going to be there that we felt that we had two guys that will give us a chance to win,” Hynes said. “He made some good saves. He saw a variety different things, had some point-blank shots, had some odd-man rushes, some traffic and things like that. He looked calm.”

Colorado forward Andrew Cogliano will be sidelined Thursday night with an upper-body injury. Cogliano scored a short-handed goal for the Avalanche on Tuesday.