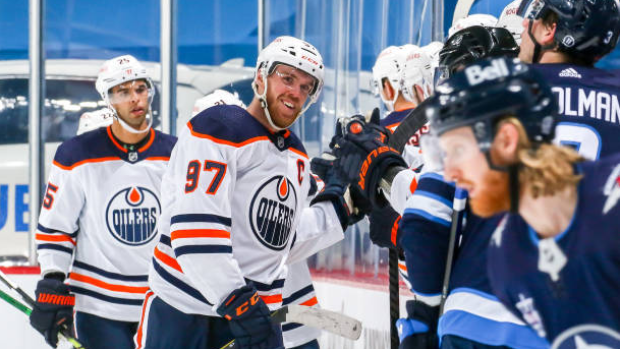 Connor McDavid added four points in Monday's 5-3 win over the Vancouver Canucks to increase his NHL-best total to 91 points in 50 games this season.

The Edmonton Oilers captain said post-game, however, that his focus remains squarely on team success, and not hitting the century mark in the shortened season.

"I'm trying to play the best that I can and make sure my game is where it needs to be heading into the playoffs," McDavid said. "It's a number. If I get [100 points], great, if not, it's not the end of the world either.

"The most important thing is making sure our team is gearing up for the playoffs and [firing] on all cylinders when we get there."

With six games remaining in his season, McDavid has an 18-point lead over teammate Leon Draisaitl in the Art Ross race and a 26-point lead over Nathan MacKinnon, who sits third in scoring.

The 24-year-old, who had 34 goals and 97 points in 64 games last season,  is also second in the Rocket Richard race with 31 goals this season, eight back of leader Auston Matthews.

The Oilers, who secured their playoff berth with Monday's win, remain second in the North Division, eight points back of the Toronto Maple Leafs with two games in hand. Edmonton had previously made the playoffs just twice since drafting McDavid first overall in 2015, including exiting in the qualifying round of last year's Return to Play.

"Your first goal every season is to play in the playoffs," McDavid said Monday. "That's step one, and we've been able to do that. Now we just need to continue working on our game and pay attention to details and get ready for the playoffs."

McDavid will get another chance to increase his point total when the Oilers face the Canucks again on Tuesday - the second of a four-game set between the two teams this week.