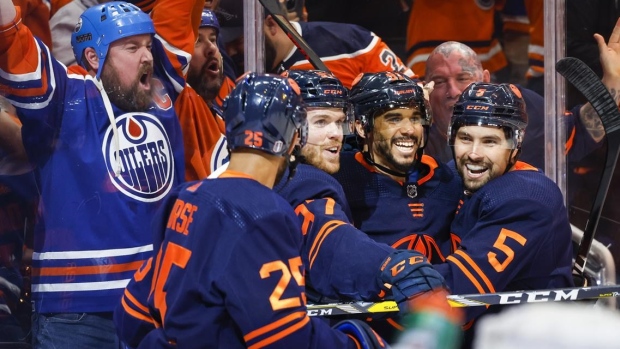 Connor McDavid may or may not end up being the greatest player ever but it’s time to recognize this: he is undoubtedly the best player ever.

Gordie Howe, Bobby Orr, Wayne Gretzky and Mario Lemieux all won Stanley Cups, all took turns as hockey’s best player and all belong in the conversation as the greatest – each of them recording numbers that will stand the test of time, all-time.

But McDavid is a freak of nature, standing on the shoulders of the greatest the game has ever seen.

Before your head explodes, let me explain.

First, for those who have followed this line of thinking before, you will notice a change in language. Previously it was argued that McDavid was not necessarily the best player ever, but his skills made him the greatest.

The sentiment remains the same, but the terms have changed places.

In hindsight, best is better than greatest to describe McDavid.

Greatest tends to connote things best captured in metrics over time. No measure has been conceived to capture McDavid’s magnificence.

We are witnessing history in living colour – blue and orange – with McDavid playing hockey at its highest level.

If you believe, as this corner does, McDavid is the most highly evolved player ever, then these playoffs represent another step forward. Because this is the best McDavid has ever played.

Better even than 2020-21 when he was the unanimous choice as NHL MVP. That was a regular-season honour. These are the playoffs.

It’s not so much about McDavid’s 23 points in 10 games this postseason.

It’s not so much about 21 primary points, six more than anyone but Leon Draisaitl has total points.

It’s not so much about a record nine multi-point games.

It’s not so much about a playoff-leading plus-16, seven better than anyone on his team or anyone else in the league.

There have been dozens of dazzling plays in these playoffs – the latest a spinning, between-the-legs play that freed him to set up Evander Kane Sunday – but that’s not all.

As Kane said, “He’s been on fire in the playoffs and has taken his game to the next level. He’s not just doing it on the scoresheet. He is physical, he is involved. He is winning puck battles along the wall, both in the defensive and offensive zones. He is a dominant force out there.”

TSN Director of Scouting Craig Button calls the Oiler captain Connor McHockeyGod: “He’s the best player we have ever seen.”

Dave Poulin played against Gretzky and Lemieux and says, “He’s doing all the things the greatest players did and he’s doing it at a higher speed. The separator for me is the speed. It’s the ultimate intimidation factor.”

As has been referenced (admittedly, ad nauseum), Flyers’ legend Bobby Clarke said the only reason Orr played in the NHL was that there was No Higher League for him to play in.

McDavid is having a gravity-defying playoff, rising higher and higher.

Button says McDavid has the brain power of Gretzky, hands of Lemieux and skating of Orr. As of this spring, you can add the will of Sidney Crosby.

This is how Darryl Sutter namelessly referred to McDavid  between Games 3 and 4 of the Calgary-Edmonton series when talking about all the open ice resulting from man-advantage and coincidental penalties: “It’s like a shinny game. It’s like when we were kids and there’s one guy who has the puck all the time.”

It’s not as though McDavid hasn’t done this sort of thing before, but taken as a whole, the games may well represent a new apex in the game’s history.

It’s important to acknowledge there are other astonishing players in today’s game – Nikita Kucherov and Auston Matthews foremost among them.

But even if, when, Kucherov records a third straight 30-point playoff and if, when, Matthews scores 70 goals, they could surpass McDavid in stats. There is no indication they will surpass him in skill.

Howe, Orr, Gretzky and Lemieux were all steps forward in hockey’s evolutionary chain.

But this corner says none of them, no matter how brilliant, ever played the game quite like McDavid.

Connor McDavid is the pinnacle of progress in hockey.