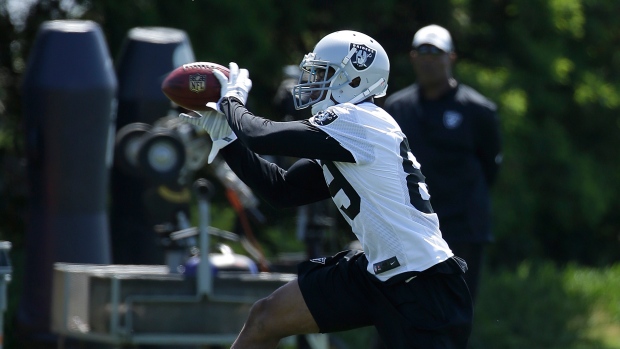 ALAMEDA, Calif. - Amari Cooper has been preparing for his first NFL practice ever since he was a 5-year-old in the backyard running patterns and catching passes from his buddies.

The hard work that began about 15 years ago helped develop Cooper into one of the top receivers in college football and the fourth overall pick in last week's NFL draft by the Oakland Raiders.

Cooper had his first chance to validate that selection on Friday, the opening day of the Raiders' three-day rookie minicamp. Cooper was joined by Oakland's nine other draft picks, 14 undrafted free agents, eight first-year players and several others who were trying out to make the team.

"I told the guys last night, 'I don't care how you got here. Everybody here is going to be evaluated and we will keep the players we think will help us win games this fall,'" coach Jack Del Rio said.

The Raiders are expecting Cooper to provide the most immediate help. Cooper is considered one of the most polished receivers to come out of college in recent years and figures to instantly become quarterback Derek Carr's top option in the passing game.

Cooper will have to wait a week and a half to start practicing with Carr at the start of OTAs. He caught passes Friday from Nevada undrafted free agent Cody Fajardo and Sacramento State's Garrett Safron, who was trying out for the team.

Cooper flashed some of the skills that made him so successful in college, bursting past seventh-round pick Dexter McDonald at one point to catch a deep touchdown pass from Fajardo.

"It went exactly how I thought it would go," Cooper said. "It went pretty good. I made a couple of plays. We looked good out there as a team."

Cooper led the nation with 124 catches last season in the tough SEC and ranked second with 1,727 yards receiving and 16 touchdown catches. In three years with the Crimson Tide, Cooper had 228 catches for 3,463 yards and 31 touchdowns.

He credits his polish as a receiver to the fact that he has played the position his entire life. Cooper said he started working on running routes as a 5-year-old when he was just trying to get open in backyard games.

Those skills developed even more when he remained at receiver in Pop Warner and he has stayed with the position.

"He's going to be a good player," Del Rio said. "He's just coming in getting started like all the rest of them. He's a young man transitioning into the league. There's a lot of work to do. It's good to have him here and participating."

Carr will also have a more familiar option to work with in his former college teammate at Fresno State, Josh Harper, who signed as an undrafted free agent. Harper's older sister, Qiava, is the vice-president of premium seating and services.

Harper formed quite a connection in college with Carr, catching 79 passes for 1,011 yards and 13 touchdowns in 2013.

"One of Derek's buddies. Derek was happy about that," Del Rio said. "We did not discuss that with him prior to getting him here. But I know he was happy to have him join us. He's a guy who has some return ability, understands a little bit how to create separation and get open and has good hands. We're glad to have him in camp."