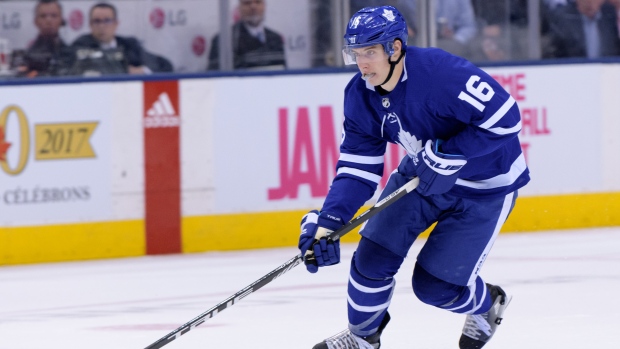 TSN Toronto reporter Mark Masters checks in daily with news and notes on the Maple Leafs. The Leafs and Tampa Bay Lightning skated at Scotiabank Arena before tonight’s game.

Jon Cooper coached Mitch Marner at the 2017 World Championships and came away incredibly impressed by the Maple Leafs winger. And the respect the Tampa Bay Lightning head coach has for Marner only seems to be growing.

"The one thing about Marner is he is as smart a player as this league has not only seen this year, has ever seen," Cooper proclaimed. "And somebody that can elude defenders and do the things he can does with the puck on the offensive side of it, it translates to the defensive side as well."

Brad Marchand, who last week tweeted about his admiration for Marner, continued to troll Leafs Nation on Monday afternoon. The Boston Bruins winger responded to a tweet with the Cooper quote by writing "Told ya." But Cooper was genuine in his praise, even referencing a play Marner made a week ago in Calgary when he intercepted a pass from Flames centre Mikael Backlund before blowing past defenceman Noah Hanifin to get a breakaway chance leading to a Zach Hyman rebound goal.

"He knew that play was happening before the defenceman did, that’s how he got the breakaway so when you have a brain like that you can play both sides of the puck," Cooper gushed.

Marner’s feel for the game also stands out to linemate John Tavares.

"What's really impressed me most about him, getting to know him and playing with him this year, is just when we talk on the bench and the things he sees and recognizes from opponents when they have the puck and the things they’re trying to do," said Tavares. "He picks up on things so well. It’s really, really impressive, especially for a guy his age. He just reads the game so well not just with the puck, but without it that he’s able to anticipate plays."

"He’s [an] unbelievable player," said Lightning winger Nikita Kucherov, "fun to watch and he makes those plays people don’t see. I guess he’s so much fun to play with and I guess guys like to play with him on same line and PP because he makes plays. He sets up passes and makes other players better and that’s what I like about him."

Marner has assisted on 22 of Tavares’ 38 goals this season. But the defensive side of the game has been just as important for the dynamic duo and that’s why Leafs head coach Mike Babcock will often match the Tavares line against other top lines.

"Growing up in the league now and kind of feeling more mature and getting more responsibilities you got to make sure you’re playing both sides of the puck really well," Marner said. "I take the D-zone very serious[ly] and a lot of the guys in this room do. I think we know if we want to win it starts in our D-zone and goes forward."

Tavares and Marner will face one of their tougher challenges tonight against Kucherov.

"He's got elite edges," said Babcock, "elite hockey sense, knows where he’s going with the puck before he gets it. I mean, his skating is second to none. He's playing with good players as well. So, you add it all together and he’s obviously the most dangerous guy in hockey right now."

Kucherov leads the scoring race with 110 points, which is 13 more than his closest pursuer, Chicago’s Patrick Kane.

"There's things Kuch does on the ice that you sit back and you leave the seat of being a coach and you become a fan, because you just marvel at what he can do," said Cooper.

What stands out to Marner?

"His skill with the puck and just how he can (make) a lot of plays out of nothing so we got to make sure we’re staying above him," the 21-year-old said. "He also finds quiet spots to kind of sit and wait in the weeds and he’s not afraid to score goals like that."

"It’s just his unpredictability," added Tavares. "His ability to beat you in different ways. He’s such a good shooter, but also obviously a tremendous passer. He’s so good at finding the late man and being able to slow things down even though he’s a guy that can play at a high pace. (He's) able to draw defenders to him and find the open man."

Kucherov was the Hart Trophy favourite midway through last season before fading a bit down the stretch and failing to earn a nomination. This season, he shows no signs of letting up. The 25-year-old Russian was amused when asked why he's reached a new level this season.

Where has he improved the most?

"Everything, I guess, a little bit, you know."

"It’s tough to put into words the kind of year he’s had," said defenceman Ryan McDonagh. "I've never played with a player putting up these kinds of numbers. Obviously, the consistency speaks to me. You have guys that will have two- or three-point nights once every three games, but he’s had multiple three-, four-, five-point games this year."

The Lightning lead the Leafs by 19 points in the standings, but have just four more regulation and overtime wins (46 to 42). And the teams have split two closely-contested games in Tampa. So, what's the gap between the clubs?

"I don’t think there’s much," Marner insisted. "I mean, all four lines on both teams can score. We both have a lot of speed and skill and I think it’s just trying to out-patient the other team, I think that’s the goal of it."

"Both teams have a lot of speed and like to get in on the forecheck," said McDonagh. "It just seems that neutral zone is so key and sometimes it's not even tape-to-tape passes that are the most effective when these two teams go at it. It's just getting that puck up into the zone and letting the forwards get on the up defenceman ... there's so much speed that time just gets taken away in the neutral zone."

Tavares suggested that the biggest difference between the clubs may be maturity.

"They got off rolling right at the beginning and they just haven't really stopped going downhill," he noted. "They're a team that's been through it for a number of years, gone deep in the playoffs, had some really good regular seasons so I think they probably have a good sense of the overall journey and why you have to play all 82 and you're trying to build something and that's something we're trying to work toward as well."

As for tonight's game, Babcock was asked if there will be any greater challenge because Toronto is coming off a week-long trip through Western Canada. Does he think that the first game back from that type of trip is tough?

"I would if it was someone else coming off of one, but today I don’t at all. I think it’s just a great opportunity."

The Leafs have the fifth-most points in the NHL and, because of the current divisional format, are almost certain to start the playoffs against the Bruins, who are currently second overall. Babcock sidestepped a question about the structure of the postseason early in his news conference, but was a bit more expansive when asked about it again.

"It does me no good. He (other reporter) already took a run at me that way and you’re going to take a run at me the other way. I mean, come on. You guys all know what everyone thinks, but it doesn’t matter, right? I get paid to coach the hockey club, I’m going to do everything I can to get us in the best situation. I really believe, in the end, you’ve got to be able to beat everybody. That’s what we’re trying to do. We’re trying to build a program like Tampa has done. You need some wounds and all that stuff and you go through that over the years as you build your program. I like the direction we’re going, I like the growth for our hockey club, I think our team is getting better. That, to me, is all I control. All this other stuff, I’ve got lots of time to think about that when I’m retired."

Hyman was absent from Toronto's morning skate, but Babcock expects he'll be able to play tonight. If Hyman can't play then Tyler Ennis will take his spot in the lineup. Ennis, who played Saturday and was projected to be a healthy scratch tonight, will play against the Lightning. Kapanen will not play tonight for precautionary reasons due to illness.