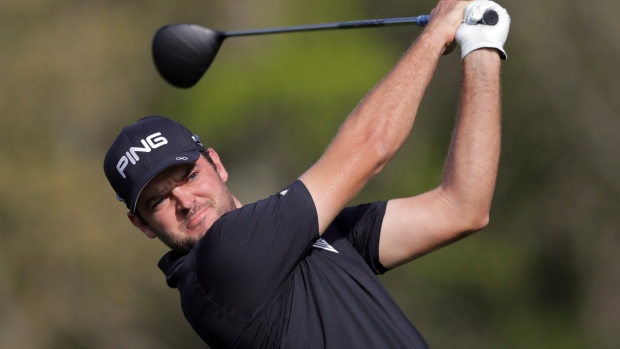 Corey Conners may be good at golf, but after a 14-day quarantine during the Christmas break, he now considers himself an expert at puzzles.

That was just one of the distractions he and his wife, Malory, used to get through the two-week lockdown when they returned to Canada to visit family and friends.

"We did a few 1,000-piece ones and some with 500 pieces," he said. "My younger sister gave us one that was a picture of us on our wedding day. We kind of knew where things went with that one."

The break was a welcome one for Conners who hadn’t been home in some time. It was also a good way to put the clubs away for a bit, especially considering it was not exactly golf season back in Listowel, Ont.

He’s back at work this week, playing for the first time in 2021 at the Farmers Insurance Open in San Diego, and he’s hoping his golf game won’t be puzzling.

"The last three weeks I’ve put in some solid work in Florida," Conners said. "I had good momentum at the end of last year and I’m quite excited to get started up again."

One of those weeks was spent under the watchful eye of Derek Ingram, his coach and the head of Golf Canada’s national men’s team. The work was focused on ensuring Conners’ ball-striking was dialled in, as well as trying to improve his approach shots. The latter involved hitting different distances, different flights and using the proper spin for specific shots.

"Ball-striking is the strength of my game, so I like to make sure that’s where it needs to be," stated Conners, who ended 2020 sixth in Greens In Regulation. "I really want to be as good as I can with my wedges, so that’s always a focus."

There was also an off-season focus on his fitness. Conners didn’t hit the weights as often as he rode his Peloton, eschewing the Bryson DeChambeau method. His driving distance has improved marginally every year, sitting just below an average of 300 yards. He isn’t about to chase extra distance at the risk of messing up other parts of his game.

"I’m afraid to make big changes like that," he said. "I’m never going to be Bryson."

Conners is focusing on a return to the winners’ circle this year after his inaugural victory at the 2019 Valero Texas Open. His play at the end of last year shows he is getting close to that achievement with top-25 finishes in his last four starts, including a T10 at the Masters, which earned him a spot in this year’s field at Augusta National.

He also has his eye on the Olympics in July in Tokyo, and representing Canada.

"It’s big on my list," he admitted. "I think it would be kind of a unique experience and I’ve always been a huge fan of the Olympics."

If the Canadian team was chosen today, it would be Conners and Mac Hughes donning the Maple Leaf, but Adam Hadwin and Nick Taylor are still very much in the race to determine the team. The selection, based on the Official World Golf Ranking, will be made on June 22, 2021.

This week, Conners’ attention is on Torrey Pines’ two courses, the North and the South. He proclaimed both to be in good shape and to his liking. He’ll be able to hit driver off almost every tee and the narrow fairways play into his accuracy.

"It’s very hard but there are not tricks," he stated. "You just have to stand up and hit it there."

Conners, who tees off at 9:30 a.m. PT on the South Course, is part of a large contingent of Canadians playing this week. Seven golfers from north of the 49th are in the field: Hughes, Hadwin, Taylor, David Hearn, Michael Gligic, Roger Sloan and Jared du Toit, who earned his spot through the Monday qualifier.