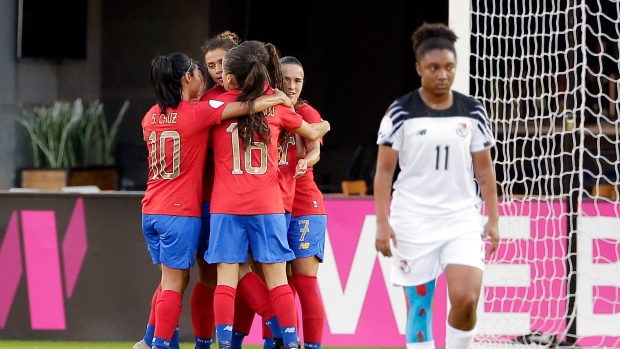 Herrera caught Panama goalkeeper Yenith Bailey out of her net for the opening goal in the ninth minute. Raquel Rodriguez, who plays for the NWSL's Portland Thorns, converted a penalty kick in the 15th.

Katherine Castillo's goal for Panama in the 45th minute closed the gap to 2-1, but Shirley Cruz's volley off a corner kick in the 67th minute extended Costa Rica's lead.

Moments later, Chinchilla scored on a header and Herrera added her second goal of the match to put Costa Rica up 5-1. Chinchilla had the final goal in the 83rd minute.

The teams are in the same group as the top-ranked United States and Haiti. Those teams were set to meet in Tuesday's late match at BBVA Compass Stadium.

Eight teams are playing in the tournament, with the title match set for Feb. 9 in Carson, California. The top two finishers will earn berths to the Tokyo Games this summer.

Panama was making its first appearance in the qualifying tournament since 2004. Both teams won their groups in the Central America qualifiers.