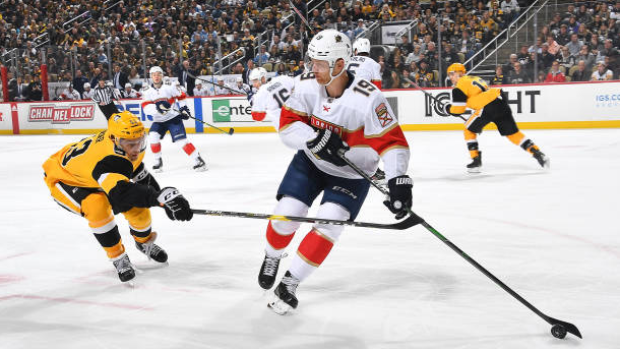 The Pittsburgh Penguins appeared to be close to reaching a deal with the Florida Panthers on Wednesday to acquire defenceman Mike Matheson for winger Patric Hornqvist, but the deal has yet to be finalized.

Sean Gentille of The Athletic writes that "insurance issues on Hornqvist's contract" have held up the deal. The 33-year-old is signed for three more seasons at a cap hit of $5.3 million.

Rob Rossi of The Athletic adds that Penguins general manager Jim Rutherford has been shopping Hornqvist but hadn't previously found a worthy return. The Penguins already have a stockpile of left-handed defencemen in Brian Dumoulin, Marcus Pettersson, Jack Johnson and Juuso Riikola, but Russo reports that Rutherford believes he can move one of them quickly if Matheson is acquired.

Hornqvist had 17 goals and 32 points in 52 games this season with Pittsburgh.

Andy Strickland of Fox Sports Midwest reports the Anaheim Ducks have informed David Backes that they expect him to be a part of their roster next season as he closes on 1,000 career games.

There had been speculation that Backes would be a buyout candidate when the window opens on Friday with one year left on his contract at a $4.5 million cap hit.

The Anaheim Ducks have told David Backes they intend to keep him and expect him to be a regular in the lineup in what could be his final season. Backes is 50 games shy of a 1000 for his career and has been working with a skating coach twice a week in Minny.

The Ducks acquired Backes, along with a first-round pick and prospect Axel Andersson, in exchange for winger Ondrej Kase ahead of the trade deadline.

Backes, 36, had three assists in six games upon joining the Ducks this season after posting one goal and three points in 16 games with the Bruins.

Hall, acquired by the Coyotes from the New Jersey Devils in December, spent this season playing out the last of a seven-year deal signed with the Edmonton Oilers in 2012. Despite only having an internal general manager in place, the Coyotes continued to make pitches to Hall earlier this month.

"It'd have to be very creative to keep him [in Arizona]," Armstrong told NHL.com. "That's something we're going to explore. We're never going to turn our eye to talent like that. He's a heck of a player, but we've got to explore. These are [things that are] going to happen between now and free agency. We're going to explore everything."