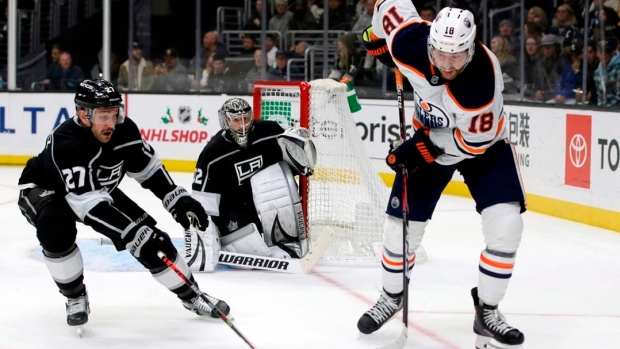 It appears the Los Angeles Kings are ready to part ways with defenceman Alec Martinez and there's no shortage of contenders looking for blueline help.

TSN Hockey Insider Pierre LeBrun wrote Monday in The Athletic that that Martinez, who is signed through next season at a $4 million cap hit, has been made available.

LeBrun notes that Martinez should be appealing to teams in need of defensive help considering he can play at both sides of the ice and is a two-time Stanley Cup champion. He points to the Carolina Hurricanes, Colorado Avalanche and Winnipeg Jets as teams who could who pursue the 32-year-old.

Martinez has one goal and six points in 29 games this season while averaging 20:58 of ice time. LeBrun cites an Eastern Conference team executive who believes the return for Alec Martinez could be a second-round pick and a prospect.

The Kings traded Jake Muzzin a year ahead of free agency last January to the Toronto Maple Leafs for a first-round pick and prospects Carl Grundstrom and Sean Durzi.

The Toronto Maple Leafs suffered yet another injury blow on Monday when it was announced that defenceman Morgan Rielly will miss at least eight weeks with a fractured foot.

The team is already without Jake Muzzin due to a broken foot and recalled rookie Rasmus Sandin Monday from the AHL to help fill the void. That's Hockey tackled the debate of whether the Maple Leafs, winless in their past three games, need to acquire a defenceman in order to keep their playoff hopes alive.

Craig Anderson's time with the Ottawa Senators may be coming to an end after an almost decade-long stretch with the team.

As TSN's Ian Mendes writes, Anderson appears to be falling into the backup role with the Senators behind rookie Marcus Hogberg and it "seems like a foregone conclusion Anderson will be dealt by general manager Pierre Dorion at some point before the Feb. 24 trade deadline."

Mendes argues against the notion that the Senators will need showcase Anderson ahead of the deadline, given the fact he's started 621 games over his NHL career.

Bruce Garrioch of Postmedia, however, believes Anderson must improve his play in order to draw interest at the deadline. The 38-year-old was pulled in his last start when allowed five goals on 30 shots against the Tampa Bay Lightning last Tuesday. He's allowed four or more goals in each of his past four starts since the Christmas break, posting an 0-3-1 record.

On the season, Anderson has a 6-11-1 record with a .897 save percentage and a 3.27 goals-against average. He will become an unrestricted free agent this summer and carries a $4.75 million cap hit.

Calling on the King?

The New York Rangers are currently carrying three goaltenders in Henrik Lundqvist, Alexandar Georgiev and Igor Shesterkin, leading Mike Chambers of The Denver Post to speculate whether the Colorado Avalanche could convince Lundqvist to waive his no-movement clause to join their playoff push.

Chambers points out that the Avalanche currently have $15 million cap space and could easily fit Lundqvist's $8.5 million salary through next season under the cap. He argues that Colorado could benefit from Lundqvist taking over with starter Philipp Grubauer currently struggling and backup Pavel Francouz unproven with just 17 career starts.

Chambers argues that goaltending "is the Avs’ only glaring issue" and the team is without a short-term solution in the organization. He notes the team could also pursue Los Angeles Kings goaltender Jonathan Quick, but he's under contract for another three seasons which could prove problematic in the future.

The Avalanche, who will host the Dallas Stars on Tuesday, are third in the Central Division with a three-point lead over the Winnipeg Jets, who are out of a playoff spot.