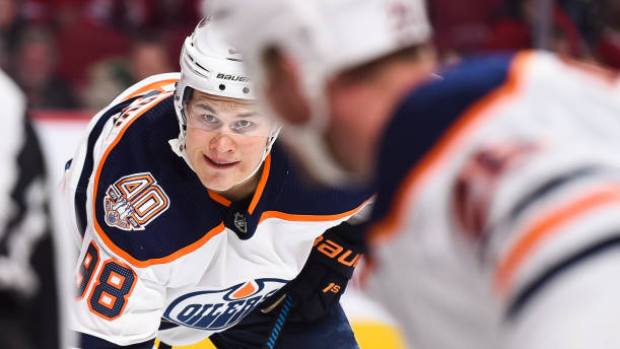 Edmonton Oilers general manager Ken Holland intends to wait until closer to the deadline to assess whether to buy or sell by Feb. 24.

Holland told TSN Hockey Insider Pierre LeBrun in The Athletic that he checked in with the New Jersey Devils ahead of them trading Taylor Hall, but he will continue to weigh long-term success against a win-now mentality over the next several weeks.

"Well, the short term is important, too. We have some players, Connor (McDavid), (Leon) Draisaitl, (Darnell) Nurse, (Oscar) Klefbom, (Adam) Larsson, (Ryan) Nugent-Hopkins … I understand that we’ve got some players who are in the prime of their careers and they want to make the playoffs. They want to be in a playoff series. They want their opportunity this year to make some noise.

"First off, the standings tell me what’s going on (ahead of the trade deadline). There was the one trade between Arizona and New Jersey but for the most part, there are so many teams so close that it’s hard to throw a bunch of assets at it today because you don’t know if you might miss. There are also teams that don’t want to throw in the towel yet because there are so many games to go. So most of your answers at this stage are internal. That’s why we brought up (Kailer) Yamamoto, and we brought up (William) Lagesson, just trying to change the look a little bit of our team after Christmas.

"So from a trade deadline standpoint, I would say No. 1, I think things will happen closer to the trade deadline. No. 2, the standings are going to tell me if I’m going to work the phone lines to be a buyer or a seller, and then when you work the phone lines you might realize the prices are too high or what I’m looking for is not available and nothing happens. There’s been a little, I’ve had a little chatter, not much. I think most managers right now are focused on their own team knowing that the trade deadline is six weeks away and there’s a lot of hockey left. The media’s looking for a story, I get it."

Holland has one potential trade chip currently outside of the organization in restricted free agent Jesse Puljujarvi, who is spending this season in Finland with Karpat. The general manager admitted that Puljujarvi could potentially be used by the Oilers to acquire a rental for their playoff push.

"No. 2, and Jesse and his agent have made it very clear to me last summer that he didn’t want to play for the Oilers. So, I’m going to proceed along that way. So No. 2 is, do you trade him at the draft in June? That would be hockey trade versus a rental trade.

"No. 3, if you can’t find a hockey trade, he would have the decision whether he wants to play in Europe again in 2020-21 or does he want to come back to the Edmonton Oilers? I don’t know what the future brings until I start to get on the phone. As I went through the process in July and August and October, I had some offers that interested me but not enough to pull the trigger. So we’ll see.

"Again, if he’s traded at the trade deadline, do you want to trade a 21-year-old player for a rental? Depends who the rental player is I guess."

Justin Williams returned to the Carolina Hurricanes on Tuesday, signing a one-year, $700,000 deal with the possibility to earn an additional $1.3 million in bonuses.

According to TSN Hockey Insider Pierre LeBrun, though, the Hurricanes weren't the only team interested in adding "Mr. Game 7" and faced competition from two Atlantic Division rivals.

LeBrun reports the Toronto Maple Leafs made their pitch to Williams earlier this week, while the Boston Bruins also inquired.

While the Hurricanes continue to work on a contract for Justin Williams, complicated by the 35 and over rules and bonuses and their cap situation, word is the Maple Leafs also made a pitch to Williams this week. Also heard that the Bruins inquired.

The Hurricanes currently sit in the top wild-card spot in the Eastern Conference with a 25-16-2 record.

Who's on the Market?

The Athletic released their NHL Trade Big Board on Wednesday, featuring 27 players who could be moved by the Feb. 24 deadline.

Tyler Toffoli and Alec Martinez of the Los Angeles Kings came in at Nos. 2 and 3 on the list, respectively, with their club sitting last in the Western Conference. Toffoli, 27, has 11 goals and 24 points this season in 43 games. He carries a $4.6 million cap hit in the final year of his current deal. Martinez remains signed through next season at a $4 million cap hit. He has five assists in 26 games this season.

Jean-Gabriel Pageau of the Ottawa Senators and San Jose Sharks defenceman Brenden Dillon rounded out Custance's top five on the list. Bruce Garrioch of Postmedia reported over the weekend that the Senators still planned to discuss contract options with Pageau before making a decision on whether to move the 27-year-old centre. Dillon, also a pending free agent, carries a $3.27 million cap hit this season. He has one goal and 10 points in 45 games this season.