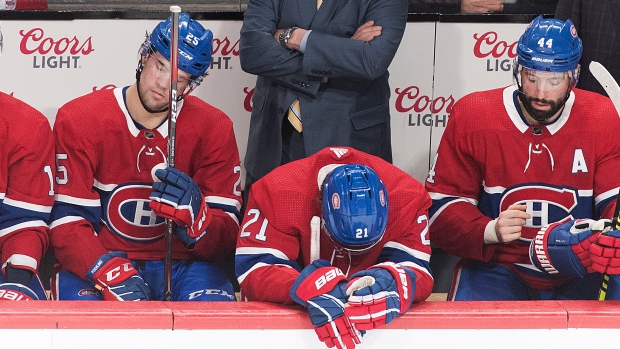 What if the Habs had a fire sale?

TSN Hockey Insider Darren Dreger told TSN Radio 690 on Thursday that the general conversation around the league is that the Montreal Canadiens as an organization are not thinking of a complete rebuild at the time, nor are they interested in doing so in the near future. Check out his full conversation with TSN Radio 690 below:

Dreger: Should the Habs tear it all down?

Darren Dreger on if the Habs should go nuclear and tear it down.

That, however, hasn't stopped local media from speculating who could be on the block if general manager Marc Bergevin goes into various stages of 'sell mode.'

Jean-Francois Chaumont of Le Journal de Montreal categorizes Carey Price and Shea Weber as candidates if the Canadiens opt for a "complete reconstruction," though their $10.5 million and $7.8 million cap hits through 2026 respectively would be deterrents.

Under the category of 'No Time To Unpack,' Chaumont writes that Ilya Kovalchuk and Marco Scandella could be potential trade candidates on Feb. 24. Kovalchuk could be good power play help for a contender, while Scandella, a UFA this summer, could be dealt with the chance of the Habs approaching him to talk contract on July 1.

Winnipeg Jets general manager Kevin Cheveldayoff told NHL.com the possibility of Dustin Byfuglien returning to the team - or not - will have a significant impact on the team's trade deadline plans.

"First and foremost, what will the availability be for me from a (NHL salary) cap perspective?" Cheveldayoff said Tuesday. "And that will be greatly influenced by the Byfuglien situation and what [happens]."

Byfuglien was suspended by the Jets after failing to report in training camp and was reportedly weighing retirement. The NHLPA filed a grievance on Byfuglien's behalf in November regarding the suspension. The Winnipeg Free Press reported last month that Byfuglien started post-surgery rehabilitation on his ankle in consultation with the Jets, putting the two sides back on speaking terms.

The 34-year-old Byfuglien had four goals and 31 points in 42 games last season and carries a $7.6 million cap hit through next season, which the Jets will need to accommodate should he return.

Cheveldayoff added, however, that Byfuglien isn't the only player whose potential return would impact the team's deadline plans.

"And the second thing there is Bryan Little, what's his status and what's his long-term status?" Cheveldayoff said. "He's an important piece, a centre and a top forward. We're keeping a close monitor there. If you have more knowledge on those things, it'll help us make decisions when we get to or closer to the deadline."

Little has been out since Dec. 5 when he was hit in the head with a puck. The 32-year-old centre has two goals and five points in seven games this season and carries a $5.29 million cap hit through 2023-24.

The Jets currently sit in the top wild-card spot in the Western Conference and Cheveldayoff credited the team for overcoming off-season losses of Jacob Trouba, Tyler Myers and Ben Chiarot, in addition to Byfuglien's absence.

"This group came together with all the outside noise, good, bad or indifferent and just put a cocoon around themselves and said, 'We're going to play and the people in here are the ones that matter,'" Cheveldayoff said. "That's served us well. There's a belief that we're never really out of a game, that we'll just stay in the fight and see where it turns out in the end."

The Jets have reached the playoffs in each of the past two seasons, with Cheveldayoff trading a first-round pick in deadline deals both years. He acquired Paul Stastny from the St. Louis Blues in 2018 and added Kevin Hayes from the New York Rangers last year.

Jim Matheson of the Edmonton Journal believes Oilers general manager Ken Holland will look to add to his roster at the deadline.

The Oilers currently sit third in the Pacific Division and Matheson expects Holland to target offensive help, with a specific focus on a third-line centre.

Matheson points to Nick Bonino of the Nashville Predators as one potential option, but only if the Predators are willing to eat a portion of his $4.1 million salary. Bonino, whose contract runs through next season, has 13 goals and 24 points in 42 games this season.

Ken Holland will help his players out at trade deadline, looking most for 3C. Wonder if he'd take a swing at Nash Nick Bonino if Preds continue to stumble, but only if Preds would pay part of his salary. He has this year and next at $4.1 mil. He wins 55 percent of his draws.

While Matheson believes trading a first-round pick is out of the question for Holland, he adds the Oilers GM may be willing to part with a second-round pick and a defensive prospect to boost the team's playoff push. He adds "you can bet Holland is eyeing" Andreas Athanasiou of the Detroit Red Wings as well. Holland drafted him with the Red Wings in 2012.

The 25-year-old has five goals and 19 points in 36 games this season after posting a career-high 30 goals and 54 points in 76 games last year. He carries a $3 million cap hit and will become a restricted free agent this summer.

You can bet Holland is eying Athanasiou in Det too. Loves his speed. His hands don't quite match his top 5 wheels but he's restricted free-agent, and Wings' Steve Yzerman didn't draft him.

With the Toronto Maple Leafs up against the salary cap, TSN Hockey Insider Pierre LeBrun suggested Wednesday to TSN Radio 1050 Toronto that the team may be best off pursuing a buy-low option at the trade deadline.

Watch the clip below for the full discussion and LeBrun's suggestion for a player who could fit the mould.