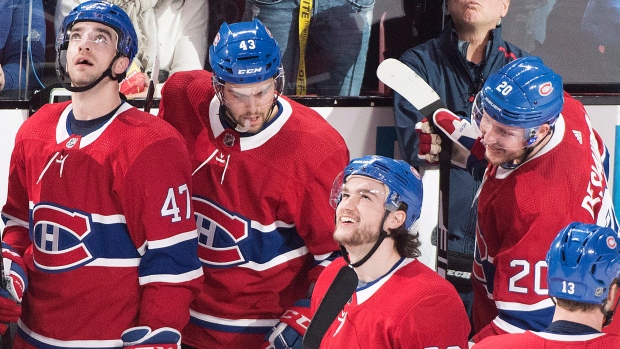 The National Hockey League's Trade Deadline is on Monday, Feb. 25, and teams will be making decisions on whether to buy or sell and decide which players can make the biggest difference and hold the greatest value. Check out the latest trade rumours and speculation from around the NHL beat.

The Montreal Canadiens sit one point behind both the Buffalo Sabres and New York Islanders for a wild-card playoff spot, but general manager Marc Bergevin said Monday he's unlikely to pursue a rental to help the team's playoff push.

Bergevin was impressed by prospects Ryan Poehling and Alexander Romanov at the world junior hockey championship and said he has no intention of touching the team's prospect pool ahead of the deadline next month.

“Obviously, we’re not going to start giving up young assets,” Bergevin said. “If we drafted these kids, it’s because we believe they had some potential, and that came to the forefront in Vancouver with our prospects that really stepped up their games.

“From Day 1, I believe that if we did stay healthy, our goal was to fight for a playoff spot, and so far that’s what we’ve done and I expect the same for the second half,” he added. “Again, I’m always going to be listening to options, but the goal is to build for the future, and just to give up assets for a short-term (addition), I’m not going to do it.

"It would have to be very appealing. Again, if there’s a young player available and there’s assets that need to go [to acquire that player], I get it. But I don’t think I’ll be in the rental business."

When asked if there were any players he had his eye on, Bergevin said the trade market won't heat up until well into February.

"Right now it’s way too early to talk about that. Other general managers - nobody has started talking about trades. And that’s usually 10 days before, a week before, so we have a long ways to go for that. Again, I’m going to listen. If I think it makes sense, I’ll do it. But I’m not going to start mortgaging the future because I know what’s coming with the World Juniors - who they’re going to be asking for - and I’m not moving these kids. So it’s going to be a short conversation, I think."

TSN Hockey Insider Darren Dreger told TSN Radio 690 Montreal on Tuesday that Bergevin is still looking to improve the team, but will move forward with a list of untouchables.

“Yes, open for business but not through a sense of desperation or urgency," Dreger said of the state of the Canadiens. "That’s not to say that Bergevin and company are not interested in improving the club. Obviously they are, but they’re going to be frugal in terms of how they manage their younger core and developing assets. I think that’s exactly what the approach should be from the Habs GM’s perspective and from the organization’s standpoint. They’ve made great strides, the culture of the team is back sound and healthy again and they’ve won probably more than their fair share of games.

"Status quo isn’t a bad thing as long as you maintain the development attitude of the Montreal Canadiens, but don’t confuse that with a lack of interest in getting better.  If there is opportunity, if there’s a player that is maybe going to inject a little bit more offence, you know clearly that they’d like to add a bit more experience I suppose or transition on their blueline, well then he’s going to listen and probably pull the trigger if it makes sense. I think he was being very, very honest and up front there saying that they’re not going to make a trade that’s going to cost them long term when looking at some of their young roster players or prospects.”

The Canadiens, who have lost two straight games, will visit the Detroit Red Wings on Tuesday night.

While the Canadiens have no plans to part with young talent, the Toronto Maple Leafs and Edmonton Oilers may be more willing to budge.

Craig Custance of The Athletic released his NHL Trade Big Board of 20 players who could be moved ahead of the deadline and included both Jesse Puljujarvi of the Oilers and Maple Leafs prospect Timothy Liljegren.

Puljujarvi, selected fourth overall in 2016, has yet to find his fit in Edmonton and has spent four games in the AHL earlier this season. He has four goals and six points in 31 games this season and Custance, who ranked at No. 11 on his Big Board, believes the Oilers could move Puljujarvi for another young player who could contribute more in the short-term future.

Custance adds that the emergence of 2018 first-round pick Rasmus Sandin might allow the Maple Leafs to trade Liljegren, ranked 12th on his board, in a significant move. Liljegren, selected 17th overall in 2017, has two goals and eight points in 19 games with the AHL's Toronto Marlies this season. He missed the world juniors due to a high-ankle sprain, while Sandin had two goals and four points in five games with Team Sweden. Custance notes that multiple sources threw cold water on the idea of the Maple Leafs parting with Kasperi Kapanen ahead of the deadline.

Custance ranked Artemi Panarin as the No. 1 player on his list, followed by Ottawa's pending unrestricted free agents Matt Duchene and Mark Stone.

TSN Hockey Insider Bob McKenzie said Monday that the Ottawa Senators' trade deadline plans remain up in the air as the team continues their contract negotiations with Stone and Duchene.

"Hard to say," McKenzie told TSN Radio 1050 Toronto when asked if the Senators would be a different team after the deadline. "It depends on what happens in the negotiations with Mark Stone and Matt Duchene. Those are two key guys. I don't think we can assume that they're not going to re-sign in Ottawa (and we) can't assume that they will.

"Duchene's agent has had multiple conversations with the Sens and there'll be another critical one coming up here within the next week or two, I would think. The Stone thing is just picking up stream now, or it will be in the next couple of weeks as Stone's representatives talk to Pierre Dorion. Both players have expressed some degree of openness to maybe staying in Ottawa and they do, they're going to get eight-year deals and they're going to get more money in Ottawa than they would anywhere else."

McKenzie added the Senators are among the league's smaller market teams who have to overpay to keep their stars and pointed to Ottawa signing Bobby Ryan to his seven-year, $50.75 million contract in 2014 as an example of a "keep your own guy contract." If Stone and Duchene don't take the Senators offer by Feb. 25, though, McKenzie believes they will be moved for assets.

"It's possible that Stone and Duchene could stay," McKenzie said, "but if they don't get deals done with them before the deadline, then they must be dealt because you can let them walk out the door for nothing at the end of the year."

The Senators sit last in the Atlantic Division with 35 points and 43 games this season. If the season ended today, the team would own the top odds for the No. 1 draft pick in June, though their pick is property of the Colorado Avalanche as a result of their 2017 trade for Duchene.

"As for (Kaapo) Kakko and Jack Hughes and all that else that goes with it, obviously the Sens are on track to do very poorly and maybe they'll have the best odds in the lottery, but it's no fun when you don't have a lottery ticket," McKenzie concluded.