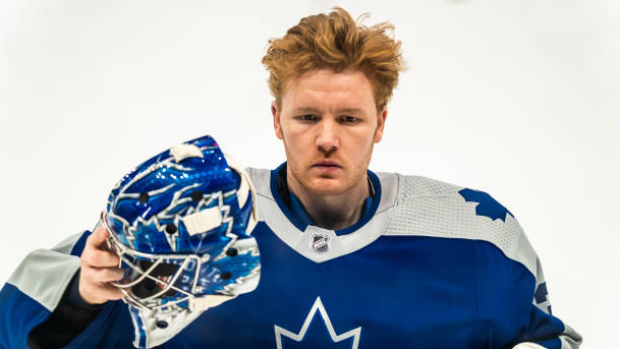 After seeing Jack Campbell post a shutout on Saturday and improve his record to 4-0 on the season, Mark Zwolinski of the Toronto Star believes the Maple Leafs should consider trading pending unrestricted free agent Frederik Andersen before the trade deadline.

Zwolinski argues the Maple Leafs should use the next three weeks to determine their starter, and if it's not Andersen, they should trade him rather than see their backup carry a $5 million cap hit.

Lance Hornby of The Toronto Sun, meanwhile, does not expect Andersen to go anywhere. He notes that Maple Leafs general manager Kyle Dubas is already focusing on adding at the trade deadline and notes the team shouldn't rely on Michael Hutchinson in a backup role.

Campbell has been limited to just four starts due to injury this season, while Andersen admitted last week that he wasn't 100 per cent. Andersen did not dress for Saturday's game after allowing four goals on 18 shots against the Calgary Flames on Friday.

“I'm not really where I want to be obviously,” Andersen said on Thursday. “I think I'm working towards just getting to as good as possible. It's just a matter of how well you can manage [the injury] and play through it, and you try to do the best you can to play as well as you can.”

Andersen, who is winless in his past three starts, has a 13-8-2 record this season with a .897 save percentage and a 2.91 goals-against average.

The Maple Leafs have not yet named their starter for Thursday's game against the Ottawa Senators.

Anaheim Ducks general manager Bob Murray told TSN Hockey Insider Pierre LeBrun in The Athletic that while he is open to acquiring prospects at the deadline, it's "quiet" on the trade front at the moment.

Ducks forward Rickard Rakell is currently listed at No. 3 on the TSN Trade Bait board. With the winger signed through next season at a cap hit of $3.79 million, LeBrun suggested to Murray that the 27-year-old's value may be at its peak, since a contender could use him for two playoff runs.

Rakell has six goals and 21 points in 33 games this season with Anaheim.

The Ducks have just four pending unrestricted free agents on their active roster, including captain Ryan Getzlaf. Murray reiterated to LeBrun that he would be open to moving Getzlaf if that's what the veteran wanted, but added there's been no evidence to suggest he wants out.

“I do have a good relationship with him and his agent and we do have an understanding, and I said this to him a long time ago, ‘If you do want to go to a contender, you got to come to me and tell me," Murray said. "And then we’ll sit down and discuss who may be interested and where would you want to go.'”

Anaheim sits last in the West Division with a 9-18-6 record and are poised to miss the playoffs for the third straight season.

Islanders general manager Lou Lamoriello said after the team placed Lee on long-term injured reserve that he was open to strengthening the club, but added he would be careful not to affect team chemistry.

"I think what we have right now is we have balance throughout the lineup," Lamoriello said. "The young players who have come in have done an exceptional job. They were ready when the opportunity came. And they also know that it’s going to get a little tougher as you go towards the end of the season. But I think they’re ready for that.

"Sometimes you add and it takes away from other players. You have to be very careful. Chemistry, to me, is as important as anything."

A pending unrestricted free agent, Palmieri carries a cap hit of $4.65 million this season. The 30-year-old has five goals and 14 points in 28 games this season after posting 25 goals and 45 points in 65 games last season.