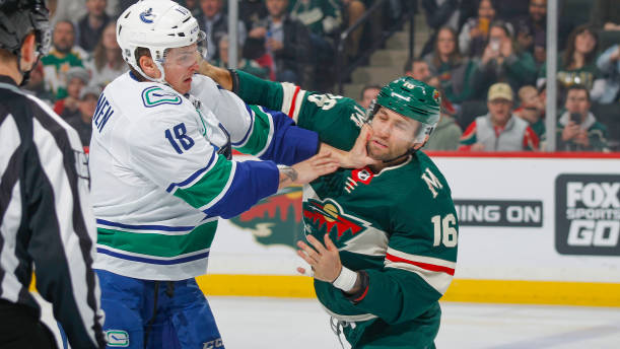 While Minnesota Wild forward Jason Zucker is not listed on TSN's Trade Bait board, the 28-year-old is no stranger to trade speculation.

Zucker was moved to the fourth line during the team's win over the Vancouver Canucks on Thursday and has remained there. He said after Sunday's loss to the Colorado Avalanche that he had not received any explanation from head coach Bruce Boudreau.

“I haven’t heard a word. I’m playing for my teammates. That’s it,” Zucker said, according to the StarTribune.

Zucker was close to being dealt to the Calgary Flames at last year's deadline before a deal fell through, and was part of a reported deal that would have sent him to the Pittsburgh Penguins last summer before Phil Kessel declined to waive his no-trade clause. He said Sunday general manager Bill Guerin has not spoken to him about his status this year.

“Heard nothing," Zucker said. "Whatever happens, happens. I’m done dealing with it. I’m done worrying about it.”

In 45 games this season, Zucker has 14 goals and 29 points. He missed just under a month of action before returning last month due to a fractured right fibula.

Zucker has a 10-team no-trade clause and Michael Russo of The Athletic reports that almost every Canadian team is believed to be on it. Russo adds, though, that the Penguins are not on his no-trade list and Pittsburgh is still believed to be interested in the winger.

Who Stays, Who Goes?

The Ottawa Senators are expected to be active over the next two weeks with 10 pending unrestricted free agents on their roster. Bruce Garrioch of Postmedia, however, writes that more than a few of those 10 players could wind up staying in Ottawa past the deadline.

Garrioch believes the chances are slim that goaltender Craig Anderson is moved, taking into account his .899 save percentage and $4.75 million cap hit this season. He also wonders whether players such as Tyler Ennis and Vladislav Namestnikov would fit on contenders, where their roles would be significantly reduced from that with the Senators.

Centre Jean-Gabriel Pageau is currently the highest ranked Senator on the TSN Trade Bait board at No. 4, followed by Dylan DeMelo at No. 13. Garrioch believes both players will be moved ahead of the deadline if they're not signed to extensions, pointing to the Edmonton Oilers, Arizona Coyotes, St. Louis Blues and New York Islanders as potential landing spots for Pageau and the Tampa Bay Lightning, Carolina Hurricanes, Calgary Flames, Winnipeg Jets and Oilers as possible suitors for DeMelo.

When it comes to defencemen Mark Borowiecki and Ron Hainsey, though, Garrioch believes the Senators could hold on to the veterans even if they're not signed to new deals by Feb. 24.

Senators general manager Pierre Dorion told TSN last week that he wouldn't sell off his pending UFAs just for the sake of doing so.

The Los Angeles Kings made their first move ahead of the deadline last week, trading Jack Campbell and Kyle Clifford to the Toronto Maple Leafs in a deal for Trevor Moore and draft picks.

With the team sitting last in the Western Conference by nine points, head coach Todd McLellan admitted Sunday that the rumours have impacted the Kings, who have lost five straight games.

"We're obviously a team that's in transition right now so it's really easy to pick certain players on our team and you speculate about them," McLellan told NHL.com. "They'll tell you, I'll tell you, 'We don't listen to that [stuff], we don't read your newspaper, listen to your show.' We hear it all, so don't let them tell you that. They know what's going on and it affects them. I think we're carrying that around a little bit with us right now."

Defenceman Alec Martinez is listed at No. 2 on the TSN Trade Bait board despite being under contract through next season at a $4 million cap hit. The 32-year-old has one goal and eight points this season while averaging 21:31 of ice time.

"I mean, it's no secret," Martinez said Sunday. "There's plenty of talk about a lot of guys in this room, myself included, but that's the way the business works. We all know what we signed up for. I'm no dummy. Everyone knows what's going on and what happens when you don't perform on the ice that changes are made. We saw it [five] days ago with Cliffy and Jack. We're all human beings, you think about it, but at the end of the day it's my job to go out there and play as hard as I can, just like it's everyone's job in this room. You've got to be professional about things."

Martinez is joined on the Trade Bait board by pending unrestricted free agent Tyler Toffoli, who is listed at No. 7. Toffoli has 14 goals and 30 points in 56 games this season, his eighth with the Kings who drafted him in 2010.

"It's easy for people outside of the game to say, 'Hey, they get paid a lot of money, they should be prepared for that,' but they are human beings, there are families involved and there's guys that have been here for a long, long time," McLellan said. "When Cliffy walked out of the room the other day and jumped on the plane the next morning, not that it was unexpected, but it happened and it was a solemn day for us. You win two Cups with a guy, spend 10 years with him, your kids are going to the playground, your wives are friends. Manhattan Beach, or the South Bay, where we live, it's a pretty tight group and a lot of guys stay there in the summer, so they're year-round teammates and year-round families. A lot of that gets uprooted.

"The sooner we get past the 24th, the better off we are."