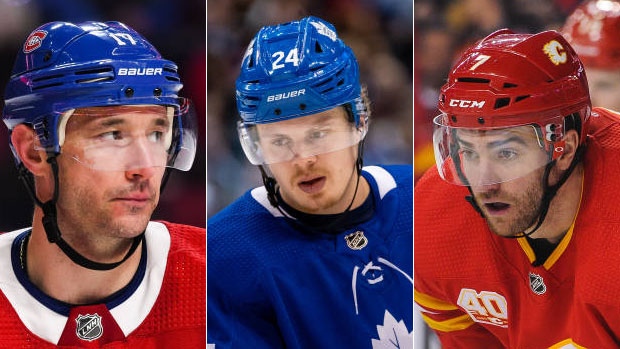 With the trade deadline exactly one month away, TSN Hockey Insider Pierre LeBrun broke down in The Athletic where every NHL team stands at the All-Star break in their deadline plans.

Among the seven Canadian teams, LeBrun believes the Toronto Maple Leafs, Winnipeg Jets, Calgary Flames, Edmonton Oilers are likely to be buyers, while the Montreal Canadiens are trending towards joining the Ottawa Senators as sellers.

As for the Vancouver Canucks, LeBrun notes that the team is likely to get injury relief over the next month and reports general manager Jim Benning is wary to make a move that could offset the team's chemistry. With their first-round pick having already been traded to the Tampa Bay Lightning for J.T. Miller last summer, LeBrun believes the Canucks may elect to stand pat at the deadline.

In Toronto, LeBrun wonders whether the Maple Leafs will add a top-four defenceman to help fill the void left by the injured Morgan Rielly. Rielly is expected to be sidelined into March and LeBrun notes that general manager Kyle Dubas could strike early again this year and acquire a player such as Matt Dumba, T.J. Brodie or Josh Manson. LeBrun believes Dubas does not want to move winger Kasperi Kapanen, but acquiring top-four help on the blueline won't come cheap.

Dustin Byfuglien's absence continues to overshadow the Jets plans, since the team will need to find out whether he'll play this season before making any moves. LeBrun believes Jets general manager Kevin Cheveldayoff will look at all options to help his team's playoff push, and could favour defensive help if Bryan Little is able to return before the deadline. The Jets, however, will need to keep pace in the playoff race in order to inspire Cheveldayoff to strike.

The Flames have been in search of a right-handed forward throughout this month and LeBrun reports that remains their priority. He wonders, though, whether the team would consider moving pending unrestricted free agent Brodie in order to fill that need. LeBrun notes the Maple Leafs had interest in Brodie over the summer and could potentially make a deal involving Kapanen. He believes acquiring Tyler Toffoli from the Los Angeles Kings, however, makes the most sense for the Flames.

The Oilers are on pace to make the playoffs for just the second time in the past 14 years and LeBrun believes general manager Ken Holland would like to add a top-six winger to help his team get there. He reports Senators centre Jean-Gabriel Pageau is high on Edmonton's wish-list, while players with term the team could include Tomas Tatar of the Canadiens and Maple Leafs wingers Kapanen and Andreas Johnsson. LeBrun adds that Holland is at least open to taking calls on restricted free agent Jesse Puljujarvi, who is eligible to return to the NHL next season.

The Canadiens sit 10 points back of the Carolina Hurricanes for the final wild-card spot at the All-Star break and LeBrun believes the team is likely to move pending unrestricted free agents Marco Scandella, Nate Thompson and Ilya Kovalchuk if there isn't a drastic turnaround. The bigger question, he writes, is whether the team moves Jeff Petry, who's signed through next season. LeBrun believes the Canadiens intend to keep Petry with an eye on making the playoffs next season. While the same is also true for Tatar, LeBrun adds the Canadiens will likely listen if team comes to them with a strong enough offer.

As for the Senators, it's no secret the team is expected to be sellers, sitting 19 points back of a playoff spot. LeBrun, however, reports that it's not a foregone conclusion the team will move Pageau. He writes the Senators are expected to hold contract discussions with the 27-year-old before making him available. In addition to Pageau, the Senators have seven other pending unrestricted free agents in Mark Borowiecki, Craig Anderson, Mikkel Boedker, Vladislav Namestnikov, Tyler Ennis, Scott Sabourin and Cody Goloubef.

Tristan Jarry told NHL.com on Thursday that the Pittsburgh Penguins have not opened contract negotiations with him or fellow goaltender Matt Murray, who is also scheduled for restricted free agency this summer,

"We haven't had any status [update] or anything," Jarry said. "It's just [Matt and I] both want to win and do as well as we can. We're both pushing each other, and we've been best friends, so it's just something we're able to share and push each other and talk about it too."

Jarry made the comments while attending the NHL All-Star Game festivities after a breakout start to this season. The 24-year-old, who appeared in just two games with the Penguins last season, has a 16-8-1 record with a 2.16 goals-against average and a .929 save percentage.

Murray, meanwhile, entered the season as the Penguins' clear No. 1 between the pipes, but has started just four games in the January. He has a 15-6-4 record with a 2.84 GAA and a .900 save percentage.

"We've been best friends ever since we started in Wilkes-Barre," Jarry said of his relationship with Murray. "We were together my first year and he played the majority of the games, and I think that's where it all started. We were together with Hockey Canada, and then, growing up, we were in Wilkes-Barre together and then in Pittsburgh for the year I backed up.

"It's just something where our friendship keeps us going and helps motivate each other."

Murray carries a $3.75 million cap hit this season, while Jarry is signed for just $650,000. Both are arbitration eligible this summer.

Jason Zucker has never been traded in his NHL career, but he's certainly come close.

Trades involving the Minnesota Wild forward fell through with the Calgary Flames, Arizona Coyotes and Pittsburgh Penguins in 2019 and, according to Michael Russo of The Athletic, one of those teams remains interested in making a deal.

Russo reports that the Penguins continue to eye Zucker as they look to replace the injured Jake Guentzel in their lineup. The Penguins would have to find a way to squeeze in Zucker's $5.5 million cap hit through 2022-23 under the cap to make a deal work.

Zucker has a 10-team no-trade clause in his contract and while it's unknown if the Penguins are in that 10, Russo's reports that Zucker's hometown Vegas Golden Knights certainly are not.

Ryan Donato is the lone Wild player currently listed on the TSN Trade Bait board, at No. 14.