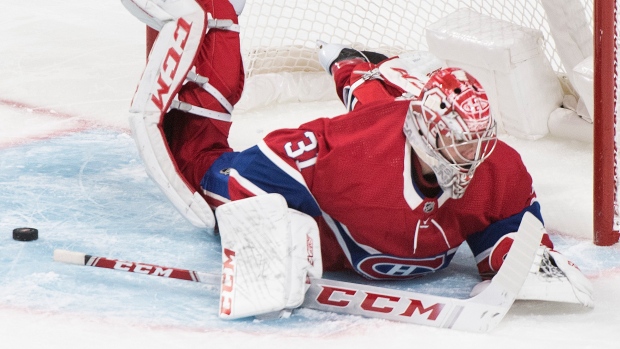 Time to Move On?

With the Montreal Canadiens reeling and now eight points back of a playoff spot, contributor Michel Bergeron of the Le Journal de Montreal believes general manager Marc Bergevin should look into trading both goaltender Carey Price and Shea Weber.

Bergeron believes it appears unlikely the franchise will win a Stanley Cup with the two veterans, arguing that there's not enough strong prospects in their pipeline. Bergeron adds that Price has shown signs frustration this season, with a 17-16-4 record with a 2.95 goals-against average and a .904 save percentage - down from .918 last season. The 32-year-old has a full no-move clause, but Bergeron argues that he would likely being willing to waive it to move to a contender.

As for Weber, the 34-year-old has 12 goals and 32 points in 46 games this season and Bergeron believes that out of respect to him, the Canadiens should give him a chance to chase the Stanley Cup.

Price is playing in just the second season of the eight-year, $84 million extension he signed with the Canadiens in 2017 and carries a $10.5 million cap through the 2025-26 season. Weber, meanwhile, carries the second highest cap hit on the Canadiens - behind Price - and is signed at $7.86 million also through 2025-26.

TSN Hockey Insider Pierre LeBrun wrote Monday in The Athletic that the Canadiens are expected to decide their plans for the deadline next week and will either enter sell mode or decide to keep fighting for a playoff spot.

Should the team begin selling, pending unrestricted free agents Nate Thompson, Marco Scandella and Ilya Kovalchuk are likely to become available on the market. The bigger question for the Canadiens, LeBrun writes, is whether to consider moving Tomas Tatar and Jeff Petry, who both have one year left on their current deals. LeBrun expects the Canadiens would at least listen to offers for Tatar, but believes the team would be more reluctant to move Petry.

One team LeBrun points to that could pursue Petry, though, is the Vegas Golden Knights (more on that below).

While it remains unclear if the Montreal Canadiens will consider making Carey Price available, Larry Brooks of the New York Post believes the Carolina Hurricanes should at least investigate the possibility of adding the netminder.

Brooks argues the the Hurricanes should look into adding either Price or New York Rangers veteran Henrik Lundqvist to boost their chances of winning the Stanley Cup. Brooks remains skeptical the Hurricanes will be able to go the distance in the playoffs being backstopped by Petr Mrazek and James Reimer.

The Hurricanes currently sit in the top wild-card in the Eastern Conference and are two points back of the New York Islanders for third in the Metropolitan Division.

Jesse Granger of The Athletic writes that the Vegas Golden Knights have already begun shopping around as they pursue defensive help ahead of the trade deadline.

Granger notes that the Golden Knights are already up against the cap and will likely have to move a contract out in any deal. He points to forwards Cody Eakin and Ryan Reaves, or defenceman Nick Holden as potential players who could be dealt to clear space for an addition.

Granger expects Vegas to look for an offensive defenceman to try to boost their power play and defensive zone exits. He wonders if the team would be willing to give up the assets required to pursue Anthony DeAngelo of the New York Rangers. DeAngelo, signed this season for $925,000, will be a restricted free agent this summer and due for a significant pay raise with 11 goals and 36 points in 44 games this season.

Should the team elect to pursue a rental, Granger throws out New Jersey Devils defenceman Sami Vatanen as an option, though his $4.875 million cap hit could be tough to fit under the salary cap. Other options with term include Alec Martinez of the Los Angeles Kings and Carolina Hurricanes blueliner Jake Gardiner, while Granger points to Brenden Dillon of the San Jose Sharks and Erik Gustaffson of the Chicago Blackhawks as options among rentals.

The Golden Knights currently sit in the top wild-card spot in the Western Conference, but are just a point back of the Calgary Flames for first in the Pacific Division although the Flames have one game in hand.