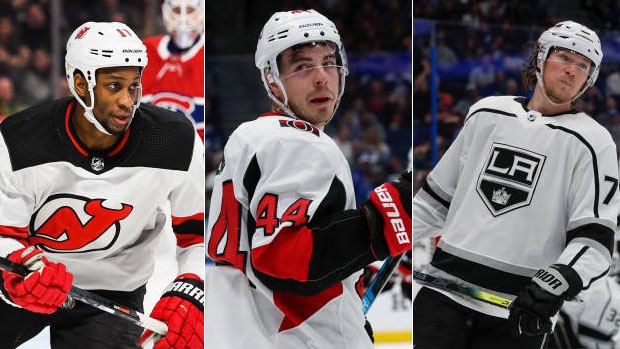 TSN Hockey Insider Pierre LeBrun reported last week the Calgary Flames are looking to add a top-six forward with a right-hand shot to their lineup ahead of the trade deadline.

LeBrun specifically pointed to Los Angeles Kings winger Tyler Toffoli as one player the Flames have their eye on.

Darren Haynes of The Athletic adds that the Flames are the only team in the NHL that is currently without a right-handed winger in their lineup. He listed 10 potential options for the team, breaking them down into players with term left on their deals and rentals.

In the rental market, Haynes believes Wayne Simmonds of the New Jersey Devils and Ottawa Senators centre Jean-Gabriel Pageau could be options in addition to Toffoli.

The Flames cleared $4.3 million in cap space earlier month when they traded forward Michael Frolik to the Buffalo Sabres and general manager Brad Treliving told LeBrun in a recent interview for The Athletic that he's looking to use that space to improve the team's offence.

"Yeah, I mean, two things for us, Pierre, No. 1 we wanted to create some (salary cap) flexibility," Treliving told LeBrun of the trade. "We’d been looking at that for a while. Michael is a really good pro, he was a good player for us. With the emergence of some of our younger players, specifically (Andrew) Mangiapane and (Dillon) Dube, there was a little bit of redundancy there. We got a lot of left shots. So it gave Michael hopefully a better opportunity.

"And it gave us some flexibility. Our hope is that we can find a productive way to use it. If we can find the right fit, and I wouldn’t say anything is imminent at this point, but we’re certainly open to try and make our team better and if we can find — as you said — find somebody that can help us or continue to look at ways to generate more offence and more goals, that’s certainly something we’d like to do."

Giving Them A Chance

The Chicago Blackhawks have surged to within three points of a playoff spot thanks to a five-game winning streak that was snapped Tuesday by the Florida Panthers.

Prior to the loss, Blackhawks general manager Stan Bowman told NHL.com that his team's recent success has given him reason to pause on his trade deadline plans.

"A month ago, we were in a tough spot," Bowman said Monday. "We've played really well, and I think if we can build off of that, then it's exciting.

"I think right now we've got to let it unfold a little bit more. We still have another month until the deadline before we have to really decide what we're going to do. Kind of give this group a chance to continue on this push we're on."

The Blackhawks recent success has come in spite of injuries to key players such as Andrew Shaw, Calvin de Haan, Brent Seabrook and Dylan Strome, though Bowman noted those injuries may have served as a catalyst for the team.

"Sometimes when that happens, I think your team maybe simplifies their game a little bit," Bowman said. "So we're probably a little bit more simplistic in our approach. But our top guys are really on their games now, so you add that up, you get a lot of wins."

The Blackhawks have just three pending unrestricted free agents on their roster, though two of them are goaltenders Corey Crawford and Robin Lehner. The other is defenceman Erik Gustafsson, who carries a $1.2 million cap hit this season.

Lehner, who dropped to 15-8-4 on the season with Tuesday's loss, is currently the lone Chicago player on the TSN Trade Bait board, checking in at No. 15. The 28-year-old signed a one-year, $5 million contract with the Blackhawks last summer and has a .922 save percentage this season.

With the San Jose Sharks shaping up to be sellers ahead of the deadline, Brian Ricks of The Mercury News examines five trade options for the team that could help them restock for the future.

Ricks wonders if the team could trade veteran centre Joe Thornton, giving him "the Ray Bourque treatment" to chase a Stanley Cup once last time. He notes that the decision could ultimately see the decision rest in Thornton's hands, since he has a full no-move clause, but believes the return for the Sharks could be as much as a second-round pick if they take a contract back in the deal.

Similar to Thornton, Ricks believes the team could look into moving 40-year-old Patrick Marleau, who he believes could fetch a mid-round pick in return. Ricks points to the Colorado Avalanche as a possible landing spot in order to provide the team with veteran experience and depth ahead of their playoff run.

Beyond their veterans, Ricks points to pending unrestricted free agents Brenden Dillon, Melker Karlsson and Aaron Dell as assets the Sharks could move over the next five weeks.

Dillon is the lone Shark listed on the TSN Trade Bait board, at No. 11. The 29-year-old defenceman, who carries a $3.27 million cap hit this season, has one goal and 11 points in 50 games this season.