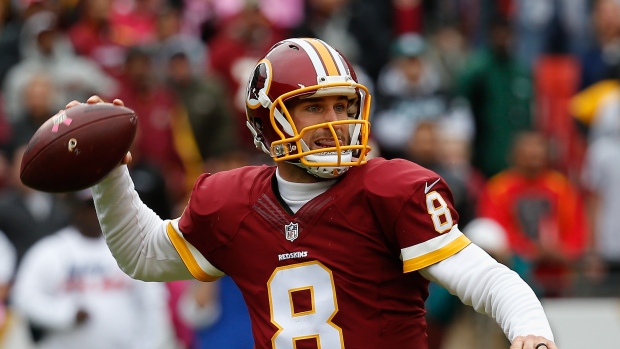 LANDOVER, Md. - Kirk Cousins still has thrown for more interceptions than touchdown passes in the NFL. And it's going to take some work to get his 4-9 record as a starter above the .500 mark.

At least the earnest, soft-spoken, fourth-year quarterback for the Washington Redskins now has a signature victory, thanks to a fourth-quarter comeback and a zero-turnover performance.

Cousins capped a 90-yard drive with a go-ahead, 4-yard TD toss to Pierre Garcon with 26 seconds left Sunday, lifting the Redskins past the Philadelphia Eagles 23-20 on Sunday.

"That final drive — I wasn't capable of doing that when I came in the league as a rookie. It takes time. It takes failure. It takes learning from experiences," said Cousins, who earned the starting QB job ahead of 2012 NFL Offensive Rookie of the Year Robert Griffin III in preseason. "A culmination of, I guess it would be, three-plus seasons' worth of work got me to a point where I was able to make the necessary plays on that drive."

Sam Bradford threw three second-half touchdown passes for the Eagles (1-3), who trailed 13-0 at halftime. Their new kicker, Caleb Sturgis, missed an extra-point attempt and a 33-yard field-goal try — four big points in what turned out to be a three-point, back-and-forth game.

"It's tough knowing I didn't do my part," said Sturgis, signed last week to replace the injured Cody Parkey.

Starting at its own 10 with a little more than six minutes remaining, Washington (2-2) used a balance of runs — five for 41 yards — and passes — Cousins went 6 for 10 for 44 yards — to work its way down the field to take the lead for good.

Cousins' last three completions went to Garcon, for a total of 32 yards.

"He is one of the greatest competitors on this football team," coach Jay Gruden said about Garcon, "and people feed off of that."

On the winning score, the Eagles sent a blitz at Cousins, but he put the football in a tight window, and Garcon did the rest.

"I felt hits from all over, from everybody," said Garcon, who played the closing minutes despite what Washington said was a sprained knee. "I looked and I was glad I was on the other side of the (goal) line, instead of, you know, a yard short."

Cousins finished 31 for 46 for 290 yards, the one TD — and, most importantly for a guy with a pair of two-interception games already this season, no turnovers. He did fumble a snap in the first half at Philadelphia's 1, but recovered it and plunged forward for a touchdown, with the help of a push from running back Matt Jones.

It was the first rushing TD allowed by Philadelphia this season.

Bradford was 15 for 28 for 270 yards, with touchdown passes of 62, 39 and 10 yards. He entered the game with three TD tosses all season and hadn't completed a pass of at least 40 yards until one that went for 45 to Nelson Agholor in the second quarter. Symbolic of the way things are going for coach Chip Kelly's much-ballyhooed system this season, though, Agholor couldn't handle a pitch from Ryan Mathews on a reverse on the very next play, resulting in a fumble.

DeMarco Murray, who missed last week's victory over the Jets with a leg injury, gained 36 yards on eight carries. He voiced disappointment with the way he's being used by Kelly.

After leading the NFL in rushing last season for Dallas, Murray joined Philadelphia as a free agent, and has 47 yards on 29 carries so far.

Asked if he's getting the ball enough, Murray replied: "No, I'm not. I don't think I am. But it's how the plays are being called. I love this offence, I love playing with these guys. It's just how it is."