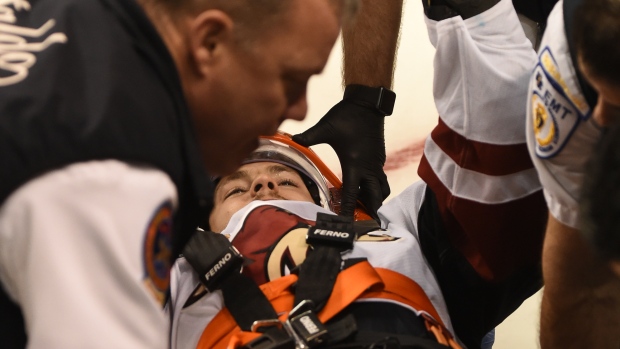 BOSTON — Arizona Coyotes forward Alexander Burmistrov was taken off on a stretcher after a hit from Bruins defenceman Colin Miller on Tuesday night left him motionless on the ice for several minutes.

Burmistrov gave a thumbs-up with both hands as he was wheeled off the ice. The Coyotes said he was taken to a local hospital for further evaluation.

Burmistrov received a pass and had just sent the puck along when Miller came into him sideways and knocked him down. Burmistrov landed on his back and rolled partially onto his side, but otherwise did not move as first the Coyotes and then the Bruins medical staffs came out to tend to him.

Miller was immediately set upon by Arizona defenceman Jakob Chychrun, but the officials broke in before it could get too far.

Miller was given five minutes for charging and thrown out of the game, and Chychrun was given two minutes for roughing. The Bruins got a short-handed goal to make it 2-1 and took a 4-1 lead before the period was over.

Burmistrov, 25, is a 2010 first-round draft pick from Russia who has one goal and 10 assists this season.