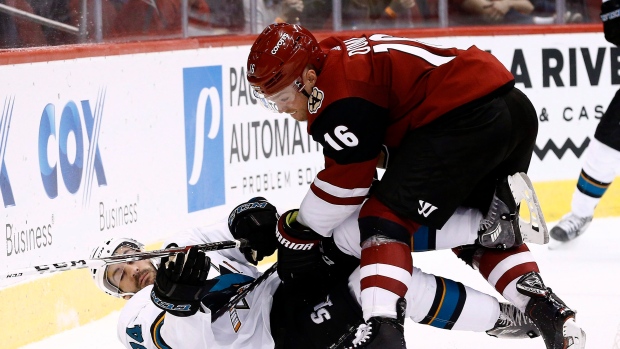 Arizona Coyotes forward Max Domi called for stricter immigration controls on Sunday in the wake of a violent attack in Edmonton.

Domi is the son of former NHL enforcer Tie Domi and was born in Winnipeg. He tweeted Sunday evening about a Somali refugee who is facing a number of charges, including five counts of attempted murder, dangerous driving and participation in a terrorist activity after allegedly attacking a police officer and running over four pedestrians.

"Really hope everyone in Edmonton is ok. We're behind you. This is why we have to be aware of some of the people we let into our country," said Domi, who added an emoji of a Canadian flag.

The attacks occurred Saturday night near Commonwealth Stadium during a game between the CFL's Edmonton Eskimos and Winnipeg Blue Bombers. Outside the stadium, Edmonton police Const. Mike Chernyk, with his marked, flashing cruiser was handling crowd control and security when a speeding white Chevy Malibu rammed through a barrier and hit his car, sending him flying five metres through the air.

The driver then got out, pulled out a large knife and began stabbing Chernyk, police said. The officer fought back, forcing the suspect to flee on foot.

Police set up checkpoints and began stopping cars, leading to a second encounter hours later with the driver, now driving a U-Haul cube van. When the truck pulled over for the checkpoint, the driver produced identification linking him to the registered owner of the Malibu.

He became suspicious when police held him up, and decided to flee. The U-Haul sped off with multiple police cars in pursuit. Police say the suspect drove in the opposite lane, almost T-boned a vehicle and purposely drove into pedestrians, injuring four.

Of the four pedestrians, two suffered head injuries including a skull fracture. Two have been released from hospital, as has Chernyk.

The response to Domi's tweet on Sunday was mixed, with many people challenging his views. An hour after his first tweet Domi put out a series of statements clarifying his stance.

"The amount of people that turn what I said into something negative is exactly what's wrong with this world," said the 22-year-old Domi.

Added Domi with the hashtag #isis "I was not disrespecting any race or religion. I'm talking about the bad people that can come over here and harm our country.

"Do you care if anyone comes into our country and causes harm to our friends and family. Seriously. Let's have a conversation about this."