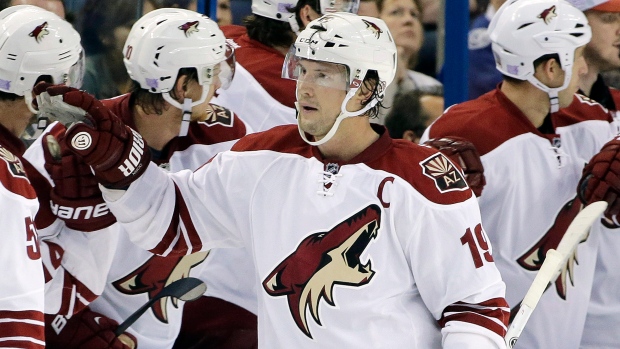 WASHINGTON - Alex Ovechkin and the mistake-prone Washington Capitals were embarrassed by the travel-weary Arizona Coyotes, prompting coach Barry Trotz to keep the locker room doors closed for a few extra minutes after the 6-5 loss on Sunday night to deliver a grim message to his players.

"Behavior has to change," Trotz said. "Or we have to change people, plain and simple."

The Capitals' collective misbehaviour allowed Washington to blow a two-goal, first-period lead by allowing five straight goals to a team that could have been forgiven for having one foot on the plane headed home.

The Coyotes, wrapping up a four-game road trip, had been outscored 12-4 in the first three games.

But there was breakdown after breakdown by the home team, and Ovechkin was often in the middle of it. He broke a six-game goal drought and had three assists, but he committed a crucial penalty that led to the Coyotes' tying goal in the second period and had a sloppy turnover that gave Arizona another score in the third.

He hasn't been the only culprit, for sure. The Capitals have lost four straight and allowed at least four goals each time.

"Sometimes I get the feeling we want to play as hard as we just need to, and that's not how I operate," said Trotz, who is in his first season with Washington. "That's not how you win in this league.

Trotz was particularly upset by a sequence in the final minute of the second period. A needless icing forced him to take a timeout because his skaters were tired. Then came a high-sticking penalty on Ovechkin, although the call appeared to be a bit dubious. Shane Doan scored on the ensuing power play with 5 seconds left in the period to tie it at 3.

"The commitment level has to be a little better than it is now in a lot of different areas," defenceman Brooks Orpik said. "We have guys making mistakes that experienced guys shouldn't make.

"Right now one guy makes a mistake and everybody else kind of watches it happen."

Trailing 3-1 after the first period, the Coyotes rallied with power-play goals by Michael Stone and Doan in the second before Sam Gagner and Doan capitalized on sloppy turnovers early in the third. Doan's second goal came after Ovechkin completely whiffed trying to control the puck near the side boards in the Capitals end.

Antoine Vermette tallied in the first period, and Tobias Rieder added his first NHL goal late in the third for the Coyotes. Mikkel Boedker assisted on both third-period goals, ending his streak of seven games without a point. Devan Dubnyk made 32 saves.

"We wanted to end the trip on a good note," Arizona coach Dave Tippett said. "Things hadn't gone our way."

The Capitals managed to put together their own rally late after pulling goalie Justin Peters for an extra skater. Joel Ward scored on a power play with 1:53 remaining, and Troy Brower cut the deficit to one with 27 seconds remaining, but it wasn't enough.

Peters, getting his third start of the season ahead of Braden Holtby, stopped just 24 of 30 shots.

NOTES: Ovechkin ended his drought with a classic Ovechkin goal — a one-timer from the left circle during a power play late in the first period. His six games without a goal had been his longest such streak since November 2011. His four points moved him into a tie with Peter Bondra (825) atop the franchise's career points list. ... Backstrom passed Dale Hunter (375) for fourth place on Washington's career assists list. ... The Coyotes won for the first time in six road games this season.