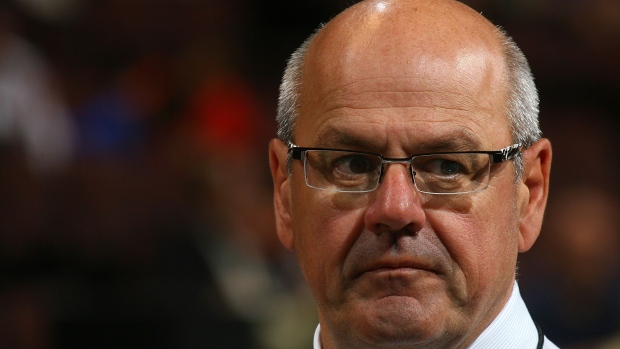 Calgary Flames executive Ken King has died at 68 after guiding the organization through several defining moments.

King, from Hanley, Sask., was vice-chair of Calgary Sports and Entertainment Corporation, which owns the Flames.

King became president and CEO of the NHL team in 2001 after three decades as a newspaper executive.

He held those roles until recently and continued with the organization as vice-chair.

He was the public voice of the Flames' ownership group comprised of Murray Edwards, Alvin Libin, Allan Markin, Jeff McCaig and the late Clayton Riddell.

"Ken was the right leader at the right time for CSEC," Edwards said in a statement Thursday. "His leadership and passion was exhibited every day in his successful delivery of the new Calgary event centre.

"He was a trusted confidant to all of the Flames owners, both past and present, and we all learned so much from him. My partners and I will miss our frequent conversations with our dear friend."

When the team's business intersected with the city's — as was the case in negotiations for a new NHL arena — King's comments reflected the position of the owners.

He and Calgary mayor Naheed Nenshi were thus the central figures in those negotiations, which created strife between the team and city council before the two sides came to an agreement in 2019.

"Ken was totally focused on delivering a new event centre to the city," current Flames president and CEO John Bean said Thursday at the Saddledome. "It was one of those projects for him he was so passionate about."

Bean did not disclose cause of death, saying it was a private matter, but alluded to the fact King was not well while dealing with the city on the arena issue.

"The human body and the human brain are an amazing thing and Ken was totally focused on delivering a new event centre to the city," he said.

"He was integral . . . he saw it through to December eighth when we got it done."

"Ken was a good friend and mentor to me," Bean said. "To say I learned a ton from Ken would be a gross understatement, including how to bet on a golf course.

"He had unbelievable drive on every aspect he undertook. He was a large man of stature, almost larger than life, and commanded the room whenever he walked in. With that energy, he tackled so many things."

King oversaw the quick reclamation of the Saddledome following the 2013 spring flood that submerged everything in the building below row eight.

The arena was ready, however, for Flames' pre-season games that September.

"His vision and steady hand have been instrumental in the success of both the Flames and the Calgary Hitmen of the WHL, his staunch advocacy for the arena project that will guarantee the Flames’ long-term viability in Calgary will serve as a legacy of his devotion to the city," NHL commissioner Gary Bettman said.

"Ken was a friend and I will miss him greatly."

"Just the presence of the man," Treliving said. "I remember interviewing with him and my first interview I came in and went to shake his hand and he drilled me in the side of my arm and almost knocked my arm off.

"Larger than life personality. We talk about an explosive personality. It was a sight to behold. But what I always found with Ken too, there was great wisdom.

"When bleep was rolling downhill, he would be a guy you'd want to be in a foxhole with."

Prior to joining the Flames, King was publisher of both the Calgary Sun and Calgary Herald, as well as a manager for the Toronto Sun and United Press Canada.

He received honorary degrees from the University of Calgary in 2012 and Mount Royal University in 2014.

Edmonton Oilers chairman Bob Nicholson said in a statement that King was "a great friend who had an amazing ability to lead and took that great passion for the team and his community in building CSEC into a sports and entertainment force in Calgary."

"Although we are fierce opponents on the ice, our organizations collaborated to ensure NHL hockey remained viable and thrived in Alberta," the statement said. "Ken played an integral role in the success of the 2012 World Junior Hockey Championship and made significant philanthropic contributions to his community, including the creation of the Calgary Flames Foundation. He will be greatly missed by his many friends with the Oilers and throughout the hockey community."

King is survived by his wife Marilyn, two daughters Amanda and Jocelin and four grandchildren.