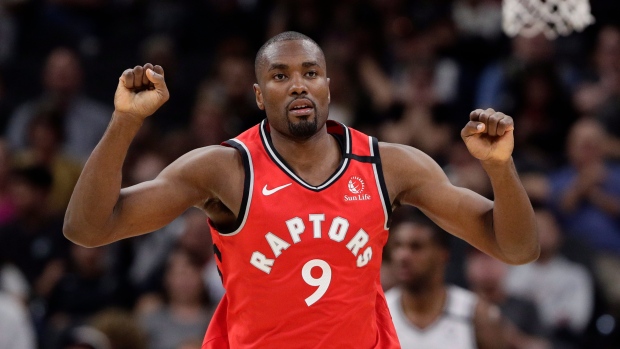 TORONTO — The Toronto Raptors will move a baby step closer to normalcy Monday with the reopening of their training centre for voluntary individual workouts.

The Ontario government paved the way Friday, easing restrictions on pro sports teams by allowing them to open their training facilities providing they follow their league's "established health and safety protocols" in response to COVID-19.

The Raptors said the OVO Athletic Centre will reopen Monday for individual on-court sessions, with strict guidelines in place.

"I think everybody's been very responsible about this," he told his daily news conference. "I think the public will just be delighted at this sign that maybe we will see sports in some way, in some shape or form, on television, without fans if necessary. And that that will be in the interest of public health in that it will give people something to do.

"But having said that, we've been very strict, all of us, in making sure that whatever is done here complies with public health first and I think that's exactly what will happen."

The NBA suspended its season on March 11 after Utah Jazz all-star centre Rudy Gobert tested positive for the novel coronavirus. It ordered teams to close their facilities eight days later.

The defending champion Raptors (46-18) have not played since a 101-92 win at Utah on March 9. Players and staff were tested in the aftermath of the game because of the positive Gobert test.

There is no word on resumption of play with NBA commissioner Adam Silver saying repeatedly that the league is not yet in a position to make any such decision.

Friday, however, was circled as the league's earliest date to open team training facilities.

Lisa MacLeod, Ontario's Minister of Heritage, Sport, Tourism and Culture Industries, said the NBA had taken "a leading role" in regards its health and safety protocols.

She said she is working with Major League Baseball's Blue Jays, the NHL's Maple Leafs and Senators and the CFL's Argonauts, Tiger-Cats and Redblacks as well as others "on what a safe return would look like for them."

"While it is imperative to do everything we can to stop the spread of COVID-19, we need to carefully and cautiously begin to reopen the economy," she said in a statement. "This is a critical sector for Ontario as sport represents more than $12.6 billion to Ontario's economy and thousands of jobs across the province.

"We look forward to seeing our athletes return to play in the not-too-distant future," she added.

With MLS having already opened the door to individual player workouts outdoors at team training centres, Toronto FC is in the process of getting its protocol approved by the league and local authorities.

An announcement on TFC individual workouts is expected in the next few days.

The NHL has yet to allow training to resume. But Friday's announcement by the provincial government does allow Leaf players undergoing rehab to be able to go back to the Ford Performance Centre, the team's training facility.

Players requiring rehab that could not be done at home initially were having it done at the training facility. Then it was switched to Scotiabank Arena after local authorities changed their guidelines.

The NHL has said that it is working towards having players returning to small group activities at club training facilities.

"Provided that conditions continue to trend favourably ... we believe we may be able to move to Phase 2 at some point in the mid-to-later portion of May," the league said in a statement on April 29.

In the meantime, a ban on NHL players using training facilities other than rehab remains in place.

Ontario Premier Doug Ford was asked Friday about reports that the NHL was looking at Toronto as a "hub city" when play does resume.

"We have had conversations with them and it's all based conditional on following the chief medical officer's protocol," he replied.

When teams do return to action, it will be in empty stadiums and with all health guidelines met, Ford said.

"I think everyone wants to see a little bit of sports if they're doing it responsibly. I love watching any sports, be it the NHL or Raptors or the Blue Jays, but those rules will apply for all those teams. There isn't going to be an exception."

While NBA guidelines allow for four players at a time in practice facilities, the Raptors will only have one player at a time in the building.

He said about half the team is currently in the city and "almost all" of those have indicated interest in individual workouts.

"This obviously brings up the idea of the other half who are not in Canada," he added. "We plan to adhere to all the guidelines and travel restrictions there as well."

Whether players who currently outside the country could return would depend on their individual immigration status, said Webster.

The Raptors are limiting the training centre access to allow players time on court for activities such as shooting, that generally cannot be done at home.

The player working out will be accompanied by one coach, with no overlap between groups. The space and equipment, including basketballs, will be thoroughly cleaned after each player uses the building.

The practice court will be the only area used by players and coaches. The rest of the building, from locker rooms to weight rooms, will remain closed.

This report by The Canadian Press was first published on May 8, 2020.