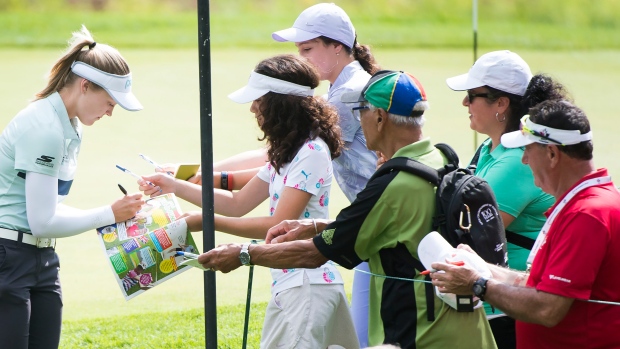 Brooke Henderson signs autographs ahead of Thursday's start of the CP Women's Open. , The Canadian Press

AURORA, Ont. – LPGA Commissioner Mike Whan would like you to know that if you’re a golf fan and you don’t come out to watch the CP Women’s Open, you’re missing something good.

It’s probably a line he uses in Portland, Ore., or Naples, Fla., or Phoenix, Ariz., but there’s a sense that he’s really reaching out to the fans of the Greater Toronto Area who so far haven’t jammed the Magna Golf Course in Aurora, Ont., but are expected to once the tournament starts on Thursday.

“If you sit home and miss this because you went to every playoff game of the Raptors or because hockey season is right around the corner, huge mistake,” said Whan in a press conference on Wednesday. “I mean, you're talking about the best female athletes in the world playing right here in your backyard, and honestly one of the most beautiful venues I've ever been in.”

To be honest, it will be a hard act to follow after last year in Regina and two years ago in Ottawa when the galleries were eight and nine deep around Brooke Henderson. The former, of course, was highlighted by a win by the 21-year-old Canadian while the latter was in her hometown where she also contended after shooting a course-record in the third round.

On Wednesday at the glitzy course built by car parts magnate Frank Stronach, the gallery following Henderson seemed a touch light. A group of young girls from the Niagara region chanted “Go Brooke Go” as their hero walked along on the third hole, providing a bit of energy. They were rewarded with some autographs.

Some other onlookers were left slack-jawed by Henderson’s powerful tee shots. But over the course of the nine holes she played, there didn’t seem to be the buzz that overwhelmed the last two CP Women’s Opens. There were gaps along the gallery ropes and only a smattering of applause when Henderson rolled in a birdie put on the par-4 hole.

“It would be a shame to play on a stage this pretty, on a stage that means this much to them, and the folks in Toronto [will] not get a chance to see this because we don't swing through here every year,” warned Whan. “We're not an annual retreat.”

This is the first time the women’s version of the Canadian Open has been held in the GTA since 2001. That was the first year of a brief sponsorship by the Bank of Montreal. It was also the first year the tournament lost its major status, after du Maurier left the scene.

Annika Sorenstam won the title at Angus Glen. A four-year-old Henderson was back in Smiths Falls, Ont.

This year, there is plenty of firepower beyond Henderson including the likes of American bomber Lexi Thompson, world No. 1 Jin-Young Ko, and past champions Ariya Jutanugarn and Lydia Ko. It’s as deep a field as the tour has seen this year.

“I don't believe we've had another stop where 96 of the top LPGA 100 are here, and that includes majors,” said Whan, before quickly couching his words. “Don't write that in your papers. But the reality of it is this is – I always tell – when people say to me, how do people feel about our tournament, and I always say, you don't have to ask me; people feel about your tournament with their attendance, and they attend this tournament in a big way.”

Last year, an estimate put the attendance at somewhere around 50,000. In Ottawa in 2017, it was in the area of 53,000. This year things are off to a bit of a slow start but an official said that tickets for the four tournament days have been selling, and it’s expected the final tally will surpass last year’s attendance.

“This is elite,” stated Whan. “It has been elite for a long time. I think Laurence [Golf Canada CEO Laurence Applebaum] and CP just continue to make sure it stays that way, and I can just tell you from flying up here with some players, it's a different feeling. People are excited before they get here. A lot of it is just [that] they know Golf Canada does it right, but what they do here in terms of how they treat the players, how they treat the caddies, how they treat the fans, it’s unique and it sets itself apart, and as a result we get the best of the best every year.”

The men’s open in June in Hamilton was a resounding success with record-breaking ticket and corporate sales. Having a player such as Rory McIlroy in the field, along with a gaggle of Canadians in the hunt throughout the four days, no doubt goosed attendance.

That should happen at Magna, too, although any walk-up sales will likely hinge on the performance of just a single player. In many ways, for the casual fan, this tournament has become the Brooke Show and that’s not necessarily a bad thing. She is a huge draw in many stops where the LPGA plays but none bigger than when she is at home.

But Whan is right in his sentiment. This is a great opportunity to see not only Henderson but the other Canadians and stars of the LPGA Tour. They’re engaging, approachable and, oh yes, exceptionally talented. Just watch and see.