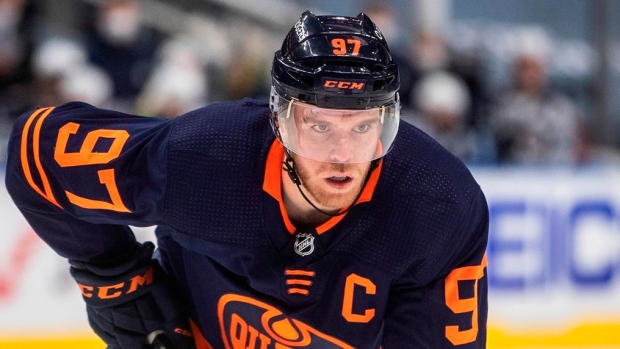 TSN Director of Scouting Craig Button weighs in on who he believes we will see don the Maple Leaf for Canada at next year's Olympics, setting up a debate between Darren Dreger and Dave Poulin with who they would put on the roster.

Button: No position gets more scrutiny than being the goaltender for Team Canada. And who has been the guy that’s stood up to it at every turn? Carey Price. The undisputable starter if he’s able and ready and if he’s not, you got Jordan Binnington, who showed unequivocally that he can lead a team to success, 2019 Stanley Cup as evidence.

As we turn to the blueline, the two Vegas Golden Knights defenders, Shea Theodore and the stabilizing presence in Alex Pietrangelo, what a top pair defence. Now you look at Adam Pelech and Cale Makar. When I look at Adam Pelech, he gives Cale Makar exactly what he needs to be the Cale Makar that’s dynamic and threatening.

As we move to the forward group, Connor McDavid and Steven Stamkos. Connor McDavid is a magnificent creator. You need the finisher, former 60-goal scorer Steven Stamkos looks like the perfect fit. Nathan MacKinnon playing in the centre ice position with the great playoff performer Brayden Point, that’ll give opponents real headaches. And while at one point I thought that McDavid and MacKinnon could recreate the ’87 magic of Gretzky and Lemieux, I love MacKinnon and Point together. And when you look at that trio of 63-87-37, tried and true. That’s my roster. Let the debates begin.

Dreger: All right, I made two changes and I’m going to have to make at least one more obviously. I dropped Sean Couturier from Craig Button’s list and I’m putting in either Anthony Cirelli or Mathew Barzal. So I’m going to have to move another forward out of that mix. A bit of an asterisk beside Steven Stamkos. 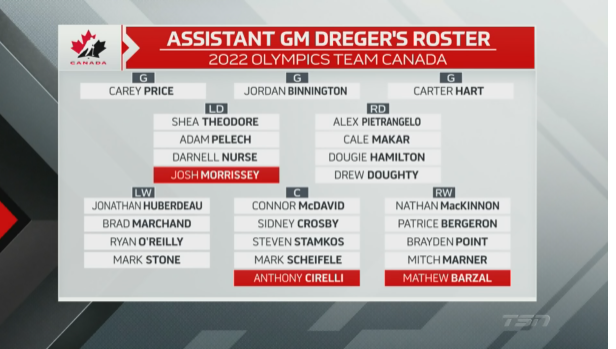 Defensively, I like Josh Morrissey. He’s playing real well for the Winnipeg Jets. Does that come at the expense of Morgan Rielly? But you’ll also note my lineup adjustments. This team is going to be built on speed and so I don’t see Stamkos on that top line but I do see Nate MacKinnon saddling up beside Connor McDavid.

Poulin: And mine’s a little simpler, James. I’m only making one change. I’m putting Josh Morrissey in for Dougie Hamilton. I want a more defensive-oriented team. I love Hamilton’s offence but I think there’s a lot of offence coming from the backside. That also slides Drew Doughty up. I don’t mind the left – right shot configurations. Obviously I’m putting a lefty in for a righty. That doesn’t matter to me. As far as the lines, I’m not even going to touch them right now because there is still a lot of work to be done there. We’ll leave that one up to Craig for now. 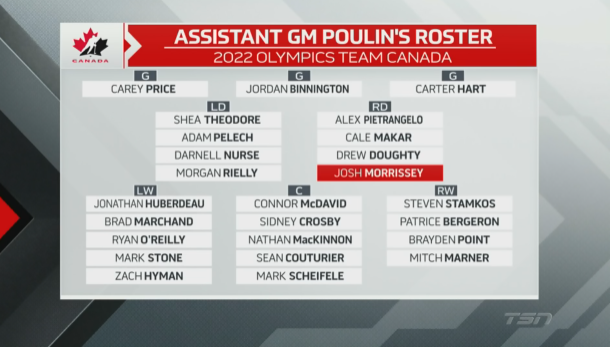 Duthie: Other guys getting consideration obviously there’s a bunch of other guys but (Andrew) Mangiapane has been off to a good start. Pierre-Luc Dubois can be versatile playing much better than last year. Ryan Nugent-Hopkins, second in assists.

Poulin: A lot of centres, James.

Duthie: A lot of potential there.