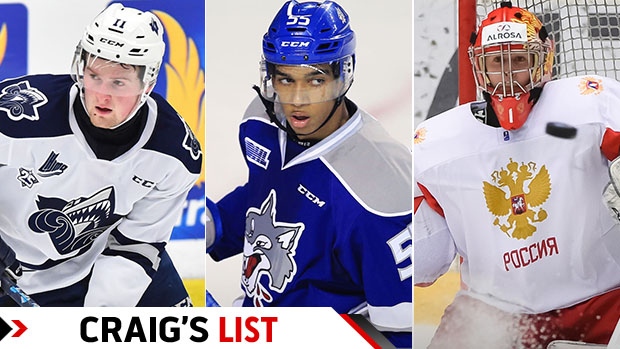 While Alexis Lafreniere is the top prospect in Craig Button's November ranking released on Monday, TSN's Director of Scouting could also envision Quinton Byfield's name called out first at next June's NHL Draft.

"I can't imagine a scenario where if a team picking No. 1, that needs a centre, would not pick Byfield," he explains.

The 17-year-old from the OHL's Sudbury Wolves is fourth in league scoring with 17 goals and 46 points in 26 games.

"Six-foot-four centres are coveted and teams usually lean towards that," said Button. "But you also can't underestimate the skill and talent of Lafreniere."

Both players lead off a deep pool of Canadian draft talent in Button's ranking, with six of the Top 10 and 12 of the Top 20 from Canada.

The biggest jump within the Top 20 goes to Zary (up eight spots to No. 10), who has 17 goals and 36 points in 23 WHL games this season. "Zary plays the game in every single fashion, explained Button. "A complete centreman."

Could a goaltender challenge for the top spot and go first overall for the first time since Marc-Andre Fleury went No. 1 in 2003? According to Button, fourth-ranked Yaroslav Askarov could potentially be that player.

"He deserves every consideration at No. 1," he said. "He's the best goalie I've seen entering the draft since Carey Price."

With the World Junior Hockey Championship just a month away, other players to watch include wingers Lucas Raymond (No. 6) and Alexander Holtz (No. 9) of Sweden and German forwards Tim Stutzle (No. 7) and Lukas Reichel (No. 27).