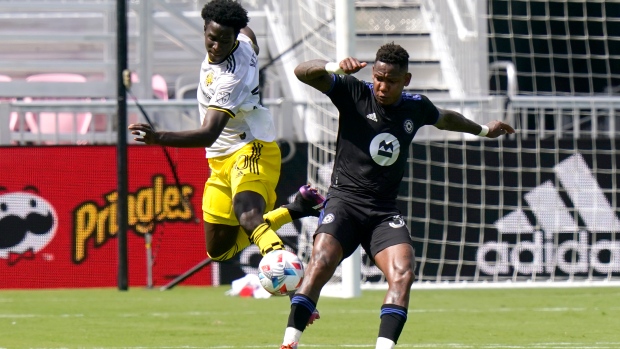 FORT LAUDERDALE, Fla. — Coach Wilfried Nancy knows his CF Montreal team could have walked off the field with a win on Saturday.

But Montreal couldn't get a shot past Columbus 'keeper Eloy Room and had to settle for a 0-0- draw.

“We could have scored three goals and if we score these three goals, this is not the same game. Today, yes, we had the possibility to be better but we didn’t finish," Nancy said of the result.

“Yes, we were supposed to win and we didn’t win, but, again, I’m happy with what I saw.”

Montreal (1-0-2) dominated through much of the first half on Saturday and had multiple chances to score.

Mustafa Kizza had a great shot in the 26th minute but sent the ball directly to the feet of the Columbus goalkeeper from a tight angle.

Finnish midfielder Lassi Lappalainen came off the bench and nearly buried a shot in injury time, but Room dove to make the last-second save.

Columbus (0-0-2) is a difficult team to score against because of their positional play and the way they hang on to the ball, said Montreal midfielder Amar Sejdic.

"Of course, that wears out opponents. You can get a little bit less focused when they’re moving the ball side to side," he said.

Still, Sejdic believes he and his teammates could have chalked up at least one goal.

"But it’s easy to say that at the end of the day. It’s just something that we need to improve on individually and as a group. And attack the next game," he said.

The group needs to be more calm inside the box, Nancy said.

"We have more time than we think in the box," the coach said. "We have to be more composed to be clinical in front of the net."

Bradley Wright-Phillips put the ball in the back of the Montreal net in the 85th minute but was quickly called offside.

Montreal 'keeper Clement Diop had come out high to challenge the two-time golden boot winner and Wright-Phillips went through him before popping a shot into the open goal.

Defender Kamal Miller said everyone on the field made it easy for Montreal to defend.

“I feel we executed the plan perfectly. There were a couple times that they broke us down but fortunately nothing came of it," he said.

Saturday marked the team's first clean sheet since Sept. 1 when it earned a 1-0 victory over Toronto FC.

It's been a solid start to the season for Montreal. The squad remains undefeated three games in for the first time since 2013.

"The fact that it’s going pretty well is definitely a confidence booster," Miller said. "We’ve just got to keep it going. Some of these performances where we could have won it, we’ve got to push for these wins because every point counts."

NOTES: Montreal defender Zachary Brault-Guillard left the field with an undisclosed injury in the 55th minute. … Montreal was without Mason Toye. The striker, who had goals in the club's first two games of the season, was out with a muscle strain in his left thigh. … Columbus is bringing in a Canadian talent this season. Toronto FC has loaned the Crew midfielder Liam Fraser for the rest of the year. General manager Ali Curtis said the move gives the 23-year-old homegrown player an opportunity to play first-team minutes.