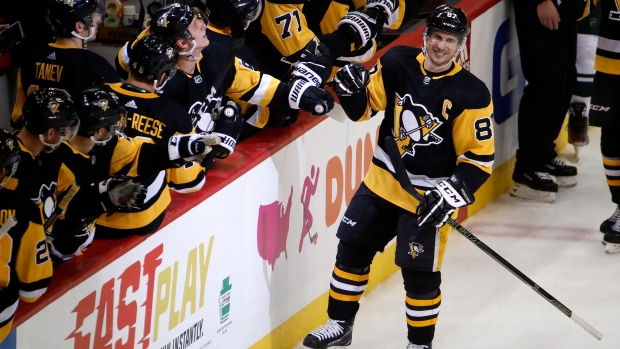 PITTSBURGH — Sidney Crosby stressed he wouldn't try to get “too fancy” in his return from a two-month layoff following abdominal surgery.

It happened anyway. The fact most of the flash cam e from Crosby's teammates during Pittsburgh's 7-3 domination of Minnesota on Tuesday night is symbolic of just how far the Penguins have come during their captain's extended absence.

Sure, Crosby delivered a sublime goal and three assists in his first game since Nov. 9. Yet he was just part of a dynamic attack that picked apart the Wild with ease. Evgeni Malkin scored twice and delivered a pretty no-look drop pass to set up Bryan Rust's 19th goal of the season. Jared McCann scored for the fourth time in five games on a tap-in goal late in the first period that came at the end of a highlight-reel sequence in which John Marino feathered a cross-ice pass to Dominik Simon, who redirected it to McCann on the doorstep.

“It's fun to compete and with the way we work too, being out there on the bench seeing it shift after shift, it’s a great way to play,” Crosby said. "Everyone’s involved and I think that’s tough for teams to play against.”

Crosby needed less than eight minutes to pick up his first point since before Halloween when he assisted on Malkin's first goal of the night 7:57 into the game. Crosby added his sixth goal of the season in the third period when he slipped a backhand past Devan Dubnyk as the Penguins rolled to their fourth straight victory.

“Every player is important here in locker room but Sid is captain," Malkin said. "He is our leader. He's a great player, great teammate. You see tonight with him, it creates four lines. Power play is better. We're lucky he's back.”

Crosby skated 17:53 after missing 28 games and looked just as dangerous as ever as the Penguins pulled within four points of first-place Washington in the Metropolitan Division.

“He's been working so hard to kind of get back in game shape and get that speed back, get that conditioning back," Rust said. "He's obviously done a phenomenal job and I'm not surprised.”

Zach Parise scored twice and Marcus Foligno added his ninth for the Wild but Minnesota never really got back in it after spotting the Penguins a four-goal lead. Dubnyk finished with 22 saves, but the Wild fell to 1-5-1 in their last seven games.

“Obviously, with their captain coming back, they have a lot of things going for them," Foligno said. "They're playing well even without him. Instead of just playing smart and working hard in a greasy road game, we just open things up.”

The Penguins were off to a solid but hardly spectacular start when Crosby went on injured reserve after aggravating a hernia in a loss to Chicago in early November. Yet rather than wobble with Crosby watching from the press box, Pittsburgh hit the gas. The Penguins went 18-6-4 during Crosby's layoff, the second-best record in the NHL over that span, relying on disciplined play and balanced scoring to rocket up the standings.

It's a formula that got a little more dangerous with Crosby's familiar No. 87 back in the lineup. The Penguins are still missing All-Star forward Jake Guentzel — out the rest of the regular season with a shoulder injury — and defenceman Justin Schultz and Brian Dumoulin, but lead the NHL in goal differential anyway.

“We’re playing well," Crosby said. “It’s going to get more difficult with every game, especially in the second half, things tend to tighten up. We’re going to have to continue to make strides but our work ethic and attention to detail has been pretty good throughout.”

Rust's 10th goal in his last 16 games came courtesy of a streaking Malkin, who chased down a loose puck in the neutral zone, drew two Minnesota players and dropped a blind backhand to Rust in the slot. Rust easily beat Dubnyk to give the Penguins a three-goal lead 14:04 into the second. Asked how he knew Malkin would find him, Rust shrugged.

“I don't know, he's Russian,” Rust said with a laugh. “He's got like three eyes or something.”

Minnesota briefly got back in it when Foligno's ninth of the season drew the Wild within 4-2 early in the third period. Minnesota would get no closer. Crosby's goal 7:41 into the third restored a three-goal lead and when Simon scored 39 seconds later the rout was on.

NOTES: Minnesota ended up playing with five defencemen instead of the usual six after the coaching staff inadvertently listed defenceman Greg Pateryn as a healthy scratch. Pateryn dressed expecting to play but was sent back to the locker room just before the opening faceoff when officials noticed Minnesota had 19 skaters dressed instead of the typical 18 (and two goalies). Center Ryan Donato, who was supposed to be scratched, skated just 4:59. Wild coach Bruce Boudreau took responsibility for what he called a “dumb mistake.” ... Crosby now has 33 career four-point games, most among active players. ... Penguins D Kris Letang became the first defenceman in team history to reach 400 career assists when he helped set up Malkin's second goal. ... The Penguins went 2 for 4 on the power play. The Wild were 1 for 2 with the man advantage.

Wild: Start a seven-game homestand on Thursday against Tampa Bay.

Penguins: Begin a two-game road trip on Thursday in Boston. The Bruins beat the Penguins 6-4 in their first meeting on Nov. 4.