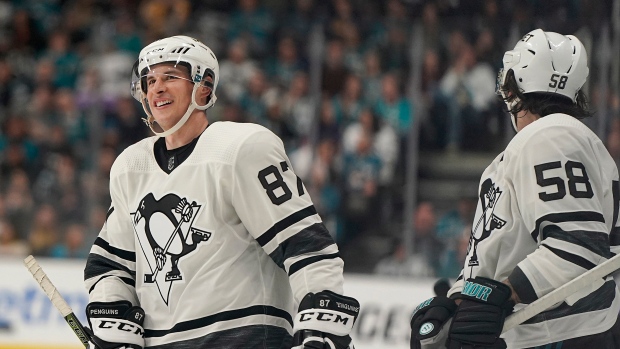 SAN JOSE, Calif. — Sidney Crosby now has one more reason to have good memories of the Shark Tank.

Crosby had two goals and three assists to win the All-Star MVP, and Henrik Lundqvist pitched a first-half shutout to lead the Metropolitan Division to a 10-5 victory over the Central Division in the championship round of the NHL All-Star game Saturday night.

Crosby finished the night with four goals and four assists in two games on the same ice where he won the Conn Smythe Trophy and Stanley Cup three years ago for Pittsburgh.

"I have some great memories here for sure," he said. "It's always been a tough place to play. Obviously, when you win in a rink and have those memories, it's something you think about every time you go there. Being in that dressing room, it's automatic to bring you back to some of those moments."

The memories aren't nearly as sweet for the Sharks fans, who booed Crosby when he won the award, joining Wayne Gretzky, Mario Lemieux, Bobby Orr, Joe Sakic and Jean Beliveau as the only players to win the Conn Smyth, the Hart Trophy and All-Star MVP.

"It's cool," Crosby said. "You play and you watch as a kid growing up and you see that presentation so it's pretty cool. I had a lot of fun today."

Lundqvist stopped 11 of 13 shots in his two games to give the Metropolitan Division its second title in four years of the three-on-three All-Star format and the $1 million prize shared by the winners of the four-team divisional tournament.

"There's more pace obviously when it's the final and there's a million dollars on the line. A lot of guy were going a little bit harder but it's good for the fans," Rantanen said. "Just too bad that we were not that ready to play."

Crosby assisted on Barzal's goal against Devan Dubnyk just 22 seconds into the championship game and then made it 5-0 in the closing seconds of the first half off a pass from Barzal. Crosby also assisted on Pittsburgh teammate Kris Letang's goal in the first half and then helped seal the game with a goal in the second half that made it 6-2.

Lundqvist made big saves against Landeskog and Claude Giroux in the period one night after winning the save streak competition in the skills challenge.

"It was good defence, good structure," Lundqvist said. "That helps, especially three on three. Honestly, I thought we had pretty good structure, so much skill up front, so many goals. You don't get surprised, you get impressed."

The first time the All-Star game came to San Jose in 1997, hometown favourite Owen Nolan capped the night by calling his shot and pointing to the spot where he completed a hat trick that delighted the Shark Tank.

Sharks fans didn't have as much to cheer for in the return, even though their three All-Stars started the night on the ice together for the Pacific. The Central blitzed the Pacific early for its first win in four years in this format, scoring seven goals on nine shots against John Gibson in the first half of the period in a 10-4 victory.

Gibson, who plays for the rival Anaheim Ducks, drew derisive chants from the fans who later called for Vegas' Marc-Andre Fleury to take over.

"Anytime you play it's a rivalry and the fans take it personally. That's what makes it fun," Gibson said. "You're still at All-Star game and you're out there with some of the best players in the league. Stuff's going to happen."

Landeskog had a hat trick and an assist and Roman Josi had three assists and a goal for the Central.

Pekka Rinne and Dubnyk combined to stop 23 of 27 shots with Dubnyk providing one of the biggest highlights with a glove save that robbed Connor McDavid on a breakaway.

The Metropolitan Division won the second semifinal 7-4 thanks to a tiebreaking goal by Letang with 3:38 to play. Sebastian Aho added an insurance goal seconds after Braden Holtby stopped John Tavares in close.

NOTES: The NHL honoured four women's hockey players who participated in All-Star weekend, Kendall Coyne Schofield and Brianna Decker of the United States, and Rebecca Johnston and Renata Fast of Canada. The four women got a standing ovation and a $25,000 donation in their name to a hockey charity of their choice. Coyne Schofield was the first woman to compete in the skills competition on Friday night, finishing seventh in the fastest skater competition.