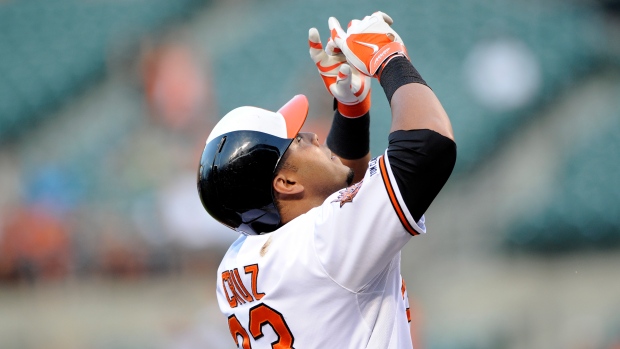 BALTIMORE - Some people like to mark their birthday with a cake and candles. Nelson Cruz has a different approach.

Cruz hit his 26th home run on his 34th birthday, and the Baltimore Orioles breezed past the skidding Texas Rangers 8-3 Tuesday night.

"A homer and a victory. That was a nice day," Cruz said. "I like to celebrate with homers."

In five career games on his birthday, Cruz is 7 for 19 with two long balls. On this night, his third home run in seven games left him only seven short of his career high of 33, set in 2009 with Texas.

Cruz needs one more homer to match his total from last year with the Rangers, a season cut short by a 50-game suspension as part of the Biogenesis performance-enhancing drug scandal.

None of that really matters to Cruz. After signing a one-year, $8 million contract with Baltimore during the off-season, he is focused on helping the Orioles earn a post-season berth for the second time in three years.

"It's been a blessing. I'm happy with the situation that we are as a team," he said. "That's more important to me. The numbers, at the end of the season we're going to look at it. But right now we focus on winning games, and that's what we're doing."

Steve Pearce and Caleb Joseph also went deep for the Orioles, who are assured of at least a split of the four-game series after winning the first two. Pearce and Cruz delivered solo shots in the first inning and Joseph connected with a man on in the second. It was the third homer in two nights for Pearce.

"He pitched as well as we thought he could," manager Buck Showalter said. "He makes our bullpen better, but it's nice to know that you have that type of option down there with a guy if you can get the proper rest."

Rangers rookie Nick Martinez (1-6) gave up eight runs, six earned, and seven hits in five innings. The right-hander is 0-5 with an 8.10 ERA in seven starts since earning his lone career win at Detroit on May 24.

"I feel like I pitched better than what it showed," Martinez said.

Shortstop Elvis Andrus, who made a key error, said: "As a player I always get mad when I'm not enjoying the game, and that's exactly what's happening right now."

For the second game in a row, Baltimore homered twice in the first inning. Pearce hit a liner in front of the left-field foul pole that glanced off the glove of Shin-Soo Choo and dropped over the wall. One out later, Cruz smacked a 1-1 pitch over the centre-field wall.

Texas pulled even in the second when Adam Rosales hit a two-run double in his first at-bat of the season. In the bottom half, Joseph drove a 3-1 pitch into the front row of the left-field seats for a 4-2 lead.

The three homers allowed by Martinez were a career high.

The Orioles used three hits, a walk and an error to pull away with a four-run fourth. With the bases loaded, Andrus fumbled Joseph's potential double-play grounder to allow a run to score. Nick Markakis followed with an RBI double and Pearce added a sacrifice fly.

"It was an easy ground ball," Andrus said. "No excuse about it."

Chris Gimenez hit a run-scoring grounder off Ryan Webb in the Texas sixth. But the Rangers went quietly after that in their ninth loss in 10 games against Baltimore, dating to last year.

NOTES: Texas designated LHP Joe Saunders for assignment and recalled RHP Miles Mikolas from Triple-A Round Rock. Mikolas will make his first major league start on Wednesday. Nick Tepesch, who was slated to start Wednesday, was pushed back to Friday against the Mets. ... The Orioles activated OF Nolan Reimould (spine) from the 60-day DL and designated him for assignment. The oft-injured Reimold, 30, has played in 56 games since the start of the 2012 season. ... Texas' Roughned Odor had two hits to snap a 4-for-29 skid.