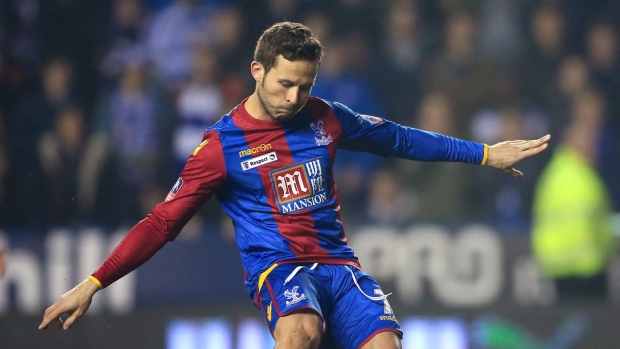 READING, England - Crystal Palace continued its habit of winning in the FA Cup while struggling in the Premier League as Yohan Cabaye and Fraizer Campbell claimed late goals to beat second-tier Reading 2-0 Friday in the quarterfinals.

Cabaye scored a late penalty to give Palace the lead in the 86th minute after a foul on Yannick Bolasie led to Reading's Jake Cooper being sent off.

Substitute Campbell scored a second goal in the fourth minute of stoppage time to confirm a semifinal appearance at Wembley for Alan Pardew's team. It's the first time the London club has reached the last four in 21 years.

Palace last won in the league on Dec. 19 and has dropped to 15th place. However, in the FA Cup it has beaten top-tier teams Southampton, Stoke and Tottenham.

Cabaye calmly sent his penalty down the centre of the goal, which Reading goalkeeper Ali Al Habsi — who made a series of key saves in the match — could only get a hand to.

Campbell's goal came when, one-on-one with Al Habsi, the goalkeeper could only parry his shot to him to set the striker up for a tap-in from close range.