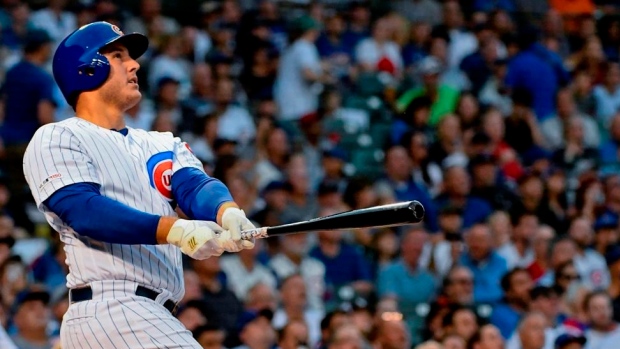 CHICAGO — When Anthony Rizzo went down in the infield grass at Wrigley Field, it looked bad for the big first baseman and the Chicago Cubs.

The result was somewhere in the middle.

Rizzo will wear a walking boot for the next five to seven days after an MRI showed he had a moderate lateral right ankle sprain.

"It certainly wasn't the worst possible news," president of baseball operations Theo Epstein said before Monday night's game against Cincinnati. "He avoided any fracture. He avoided any type of damage to the joint that would require surgery."

But Rizzo is running out of time, and Chicago is fighting for a playoff spot in the NL Central and wild card races. After the series opener against the Reds, the Cubs will have 12 games left.

"My body usually responds pretty well, so certainly not ruling it out," Rizzo said when asked about returning this season. "I have every intention on trying to do everything I can with the training staff to get back on the field with the boys."

The 30-year-old Rizzo had to be helped off the field after he got hurt while going to field a bunt in the third inning of Sunday's 16-6 victory over Pittsburgh.

He will be re-evaluated after he gets out of the walking boot. The team says it will know more about when he might be able to return at that point.

"Hopefully by the end of the week we'll have better news," manager Joe Maddon said. "But in the meantime you just got to plan that he's not going to be there. ... I really believe our guys will rally around this moment, I do."

The loss of Rizzo is another big blow for Chicago, which already was playing without Javier Báez after the All-Star shortstop broke his left thumb. Rizzo is batting .289 with 26 homers and a team-high 93 RBIs. The two-time Gold Glover also plays a major role in the team's defensive plans.

Victor Caratini started at first against Cincinnati, and utilityman Ben Zobrist was on top of the lineup after Rizzo led off in the previous four games. With Rizzo helping spark the offence, the Cubs piled up 47 runs in a weekend sweep of the Pirates.

"You don't replace an Anthony Rizzo or a Javy Baez," Zobrist said. "Next guy jumps in there and does what he's capable of doing. ... You're not going to make that up with one player. You got to make it up with a couple players."

The Cubs also have been playing without closer Craig Kimbrel, who is coming back from right elbow inflammation. He is scheduled to throw a simulated game Tuesday and could return this weekend.