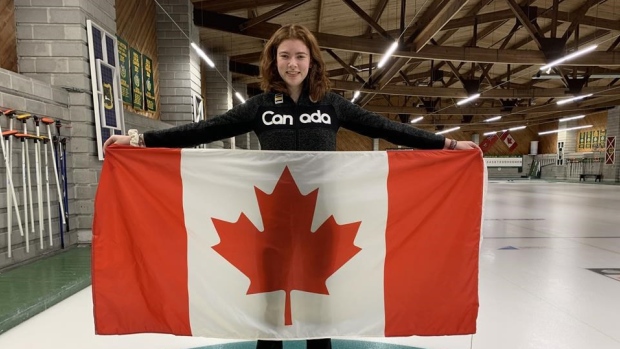 Curler Lauren Rajala was thrilled to get word last year that she'd be representing Canada at the 2020 Winter Youth Olympic Games. The butterflies really kicked in though when the Canadian Olympic Committee called to see if she'd like to serve as flag-bearer.

"My hands were shaking," Rajala said. "I just felt super-grateful to get the opportunity."

Rajala, who curls out of the Idylwylde Golf & Country Club in Sudbury, Ont., will carry the Maple Leaf at Thursday's opening ceremony for the Jan. 9-22 Games in Lausanne, Switzerland.

She'll be joined at the event by a Canadian delegation of 77 athletes and 24 coaches. Almost 1,900 athletes — all between the ages of 15 and 18 — from over 70 countries will participate in the Games.

Rajala, 17, won gold last year at the Canada Winter Games and the national U18 playdowns as lead on Team Croisier.

In Lausanne, Rajala will play with skip Nathan Young, vice-skip Emily Deschenes and second Jaedon Neuert in the mixed team event. After the competition, players will be ranked and assigned partners from other countries for mixed doubles.

"I'm very excited for that as well because it's a new twist on the whole Olympic experience," Rajala said.

"She is a wonderful team member (and) has had some great success in her curling career so far," Oldershaw said. "She is a dedicated student and volunteers both at her high school and home club. I am so pleased that she is going to lead our incredible team into the Games."

There will be 16 disciplines across eight sports on the Lausanne 2020 program, including four that will make their event debut.

Ski mountaineering — a combination of skiing, climbing and hiking — is considered the most radical new sport. Medals will also be awarded for the first time in mixed-nationality 3x3 hockey, women's doubles luge and women's nordic combined.

Oldershaw, who competed in swimming at the 2008 Beijing Olympics, was an athlete mentor at the Lima Pan Am Games last summer in Peru. She is serving as chef de mission for the first time.

"I'm most looking forward to meeting the athletes and just being their biggest supporter and cheerleader," she said. "Just making more connections with these athletes who are going to have their first experience at an Olympic-type Games.

"Moving forward and showing them, explaining to them that this could be a great stepping stone in learning how to compete on this world stage and managing all the expectations."

Alberta leads all provinces and territories with 24 athletes on the Canadian team. Ontario is next with 19, followed by 14 from Quebec, 13 from British Columbia, three from Manitoba, two from Yukon and one each from Newfoundland and Labrador, Nova Scotia and Saskatchewan.

CBC/Radio-Canada will serve as the official Lausanne 2020 broadcaster in Canada.

Lillehammer was the last host of the Winter Youth Olympic Games in 2016.