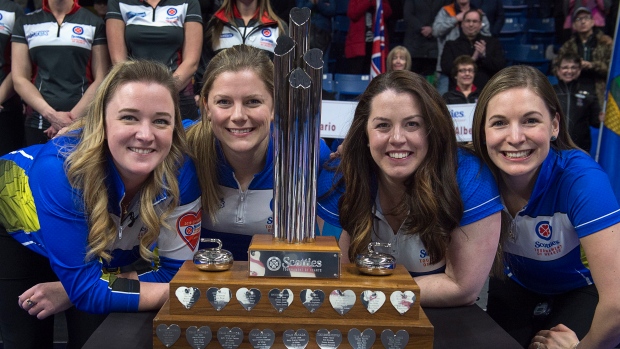 Several top curlers have started talks with Curling Canada to address concerns about the difference between men's and women's payouts at the national championships.

Lisa Weagle, who plays lead on Team Rachel Homan, is part of a group of curlers — women and men — who have recently discussed the subject with the federation.

"We're confident that they're listening to our concerns and they're working with their sponsors to try to make it equal," Weagle said.

In addition to prize money, national champion teams are also eligible for athlete funding, including almost $170,000 from Sport Canada over a two-year period, along with sponsorship cresting funds for playoff and world championship appearances.

"I can understand there being some (general) difference because the Brier nets more money if you look at ticket sales and the Patch (Brier entertainment venue/bar) and all that stuff," Carey said on a recent conference call. "The viewership ratings are slightly higher. But the difference isn't justified completely.

"So I think that from a financial standpoint, from a business standpoint, it's hard to demand exactly equal money. That would be great, but it does need to get closer. We are having those conversations to move it in that direction."

Other top domestic events, including the Pinty's Grand Slam of Curling series and Home Hardware Canada Cup, offer an even split for prize money payouts. The men's and women's competitions for each event are held concurrently at the same venue with the same sponsor.

Team Brad Jacobs and Team Jennifer Jones earned $14,000 apiece for their titles at the Canada Cup in December. Bottcher and Homan both earned $30,000 for their teams with victories at the Grand Slam's Canadian Open in January.

The Scotties and the Brier are highlight stops on the Season of Champions calendar but they have different title sponsors. Curling Canada holds the events a few weeks apart in different cities.

Kruger Products took on title sponsorship of the Canadian women's championship in 1982 while Tim Hortons came on board for the men's playdowns in 2005.

"Our contracts with our title sponsors are very different and I'm not at liberty to give confidential business details but I do want to clarify that both title sponsors provide quite significant support to the athletes and to the sport," Curling Canada chief executive officer Katherine Henderson said in an email.

Curling Canada did not say whether future discussions with the players were planned. There is no formal domestic players' association in place so athletes often have to contact federation brass directly with any concerns.

The Brier drew more spectators than the Scotties this season but television ratings were similar.

The men's competition in Brandon, Man., had an announced average attendance of 3,288 spectators per draw while the Scotties averaged 2,035 per draw in Sydney, N.S.

Henderson noted that Kruger also sponsors and invests in provincial tournaments and that Scotties teams receive jewelry for their participation, raising the value of the women's compensation.

"We look at this on an ongoing basis and will continue to do so with our stakeholders," she said.

Athletes do not have the option of choosing cash instead of jewelry.

There is still a significant payout gap in many professional circuits like golf and tennis, for example, although it's difficult to compare with curling since those are world tours with international players and different television/sponsorship arrangements.

A national curling championship includes provincial and territorial winners, most of whom still consider themselves amateur athletes.

Weagle said curling has come a long way since her tour debut almost a decade ago.

"I think it's great that we can say that we're really close or on par at most of our events," she said from Ottawa. "I know a lot of work has gone on over the years where a lot of women have fought for this, and men as well, to get equal pay.

"I think it's our responsibility now to keep working and get it so that it really is truly equal so that the next generation of curlers coming up — and hopefully I can see it during my playing career too — that we truly are equal."

Team Thomas Ulsrud has accepted a special invite to play in the Curling World Cup's Grand Final this May in Beijing.

The 47-year-old Norwegian and his Oslo-based team missed the playoffs in the circuit's second leg last December in Omaha.

The 2020 world wheelchair curling championship will be held in Wetzikon, Switzerland, the World Curling Federation said in a release.

The 12-team event is set for Feb. 29 to March 7 in the Zurich suburb. It will be the fifth time that Switzerland has hosted since the event's debut in 2002.