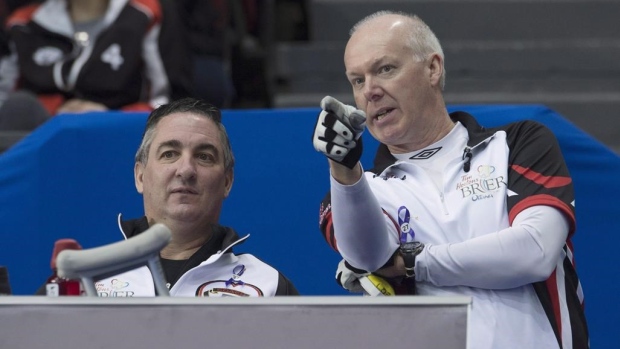 Slowing the flow of Canada's curling expertise to other countries has forced a coaching compromise.

Curling Canada has created the role of a high-performance consultant for adult teams competing in national and international competition to encourage that expertise to stay in house.

The time commitment to do that is seen as a barrier to the country's top names coaching domestic teams.

"In Canada, a coach has to be certified to be called a coach or in the process of getting their certification," said Rick Lang, who spearheaded the new policy for Curling Canada.

"Now we're saying Glenn Howard, you can be on the bench without that."

Reigning Canadian women's champion Chelsea Carey is all for the change.

"Canada in the past has been very restrictive with the coaching courses you had to take in order to be able to coach at a national or international event," she said.

"If you've accomplished things at a certain level, you shouldn't have to go through the same training as somebody who has never won a Canadian championship. You just should not have to."

Curling Canada is walking a fine line as it doesn't want to discourage people who want to take NCCP certification to coach curling.

A high-performance consultant must own a title from one of the following — national championship, Canada Cup or Olympic trials — or be a three-time Grand Slam winner.

"We don't want to take anything away from the coaching certification program and the coaches who have gone through the program, but having been through this myself, one of the problems is I don't have the time to get my certification when I can give back to a team right now," explained Marc Kennedy, an Olympic gold medallist and current third for the Brad Jacobs team.

"One of the reasons you're losing those top curlers to other countries is because they're busy with kids, they're busy with jobs and how am I going to give up three weekends to get a coaching certification, when I can go help that young team right now to get better?"

A high-performance consultant will still be required to take the mandatory Safe Sport and Make Ethical Decisions modules, which can be done online in a day, as well as undergo a police background check, Lang said.

"This is all about making sure Canadian curling teams that are aspiring to be the best and those that are the best right now have full access to the wisdom of our most accomplished champions," he said.

"We want to strengthen that competitive culture in Canada by making sure our stars of the past are helping the stars of today and are able to do that."

If you're wondering where the big-money World Cup of Curling went, the international four-tournament series that offered just over $1 million in prize money was suspended after just one season.

The World Curling Federation said in a statement Chinese sponsor Kingdomway Sports was in breach of their contractual agreement and new sponsors are being sought.

In an already-crowded curling calendar, it was a headache for Curling Canada to find teams that could fit travelling to Sweden, the United States and China in their schedules.

But it was also a lucrative event for those who did, including Kevin Koe's Alberta foursome that claimed $86,000 for winning both the first men's event in Suzhou, China, and the Grand Final in Beijing.

Jennifer Jones won the women's Grand Final for winnings of $48,000.

In the Rings, a weekly curling notebook, is published every Tuesday.