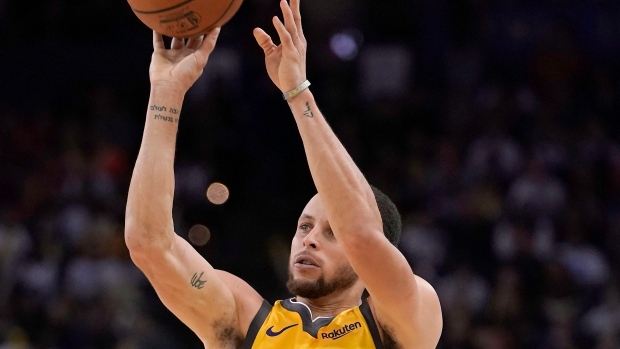 OAKLAND, Calif. — Stephen Curry was back after a night off, and all was well again for the Golden State Warriors.

Curry had 26 points, Klay Thompson added 24 and the Warriors rebounded a night after a blowout loss with a 121-114 win over the Detroit Pistons on Sunday.

The Warriors fell 126-91 to the Dallas Mavericks on Saturday, but that was with Curry resting on the bench. He came back strong against the Pistons, and Golden State also got 14 points and 11 assists from Kevin Durant. Draymond Green added 14 points and eight assists.

Warriors guard Shaun Livingston, who had eight points off the bench, said having Curry on the court was of the "utmost importance for sure. He's kind of the engine of the team. His pace and his gravity on the court, it opens up the game for all of us."

Curry said there was a sense of intensity from the start after the big loss.

"Nobody felt good about that, even the guys that didn't play," said Curry, who had played 49 straight games before Saturday's night off. "You could see that sense of urgency, especially in the first quarter to set the tone and try to make the game as easy as possible on ourselves for 48 minutes."

The win moved the Warriors (50-23) back into the first seed in the Western Conference by a half-game over the Nuggets (49-23). The Pistons slipped to seventh in the Eastern Conference with the loss.

Blake Griffin had 24 points and eight assists to lead Detroit. Luke Kennard hit three 3-pointers and had 20 points off the bench.

"We are all right, we are playing good basketball," Pistons guard Ish Smith said. "We are just playing (some of the best teams in the West)."

DeMarcus Cousins and Andre Iguodala sat out for the Warriors. Cousins is not playing in any back-to-back contests this season while recovering from a left Achilles tendon injury.

Green hit a 3-pointer at the buzzer to give the Warriors a 63-49 halftime lead, and Golden State led 97-77 entering the fourth. The Pistons got within nine points with five minutes left in the final quarter, but a long 3 by Curry gave the Warriors back their double-digit lead until the final seconds.

Pistons: Have lost 13 of their last 16 against the Warriors. ... Andre Drummond had 12 points and 11 rebounds.

Warriors: Curry scored the Warriors' first eight points. ... With their 50th win of the season, set a franchise record with six 50-win seasons in a row. ... Durant hit his only 3-pointer of the night in the second quarter, tying him with Glen Rice for 25th place on NBA career list with 1,559 made shots from beyond the arc.

Though Warriors coach Steve Kerr said he is still aiming his team for the top seed in the Western Conference, he said before the game that players' "health always comes first" and that he will continue to give his players nights off as needed during the last three weeks of the regular season.

Pistons: Face the Nuggets on Tuesday night in Denver, where they have lost eight of their last nine games.

Warriors: Travel to Memphis to face the Grizzlies on Wednesday night. Golden State has won 14 of its last 18 games against the Grizzlies and returns to Memphis on April 10 for its last game of the regular season.