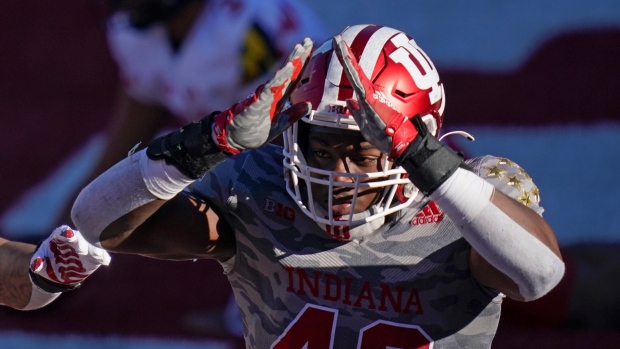 BLOOMINGTON, Ind. — Stevie Scott III ran for three touchdowns and No. 12 Indiana had three interceptions, three sacks and a game-changing safety in a 27-11 win over Maryland on Saturday.

Freshman Tim Baldwin Jr. ran for a season-high 106 yards for the Hoosiers (5-1), who have won four straight at home.

The safety, which came on a tackle by linebacker D.K. Bonhomme, a sophomore from Ottawa, midway through the third quarter gave the Hoosiers a 9-3 lead. Indiana extended the margin to 17-3 on the ensuring possession. Scott scored on a 1-yard plunge and backup quarterback Jack Tuttle completed his first throw of the day — a 2-point conversion to Peyton Hendershot. Tuttle also led the Hoosiers to two fourth-quarter scores after replacing injured starter Michael Penix Jr.

“It’s not by chance, I can promise you that," Indiana coach Tom Allen said, referring to the defence's big plays. “Just watch the film."

Maryland (2-2) moved the ball well in the first half but struggled in the red zone after a 21-day break stemming from a COVID-19 outbreak that caused the cancellation of two games. Taulia Tagovailoa missed two open receivers for potential scores in the first half and was picked off twice in the red zone. Also, Joseph Petrino missed a 29-yard field goal wide left on the first possession of the game.

Penix struggled before heading to the locker room in the third quarter after suffering what appeared to be a right leg injury while he was getting tackled. He was 6 of 19 for 84 yards. Tuttle completed all five of his passes for 31 yards.

Scott carried 24 times for 80 yards and Baldwin took advantage of his first significant action this season as Indiana rushed for a season-high 234 yards. Baldwin carried the ball 16 times after logging one carry in the Hoosiers' previous five games.

Tagovailoa was 17 of 36 with 241 yards and one touchdown in the waning minutes. Dontay Demus Jr. had six receptions for 114 yards and the score.

“When you turn it over three times and have a safety, eight penalties, we didn’t give ourselves a chance," Maryland coach Michael Locksley said.

Indiana secured a winning record in Big Ten play for the second straight season, something that hadn't happened since 1987-88.

Maryland: Clearly, the Terrapins were rusty. Perhaps that should have been expected. But the offence regressed after moving the ball well in the first half.

Indiana: Penix's injury could be a problem for Indiana, but the defence continues playing well. The Hoosiers may need it to do even more going forward, especially if No. 3 Ohio State can't fulfil the Big Ten's six-game minimum to be eligible for the conference championship game.

Last week's narrow loss at No. 3 Ohio State turned many into believers, and the Hoosiers could soon return to the top 10.

Maryland: At Michigan next Saturday.

Indiana: The Hoosiers will try to clinch the No. 2 seed in the Big Ten East next Saturday at No. 16 Wisconsin.