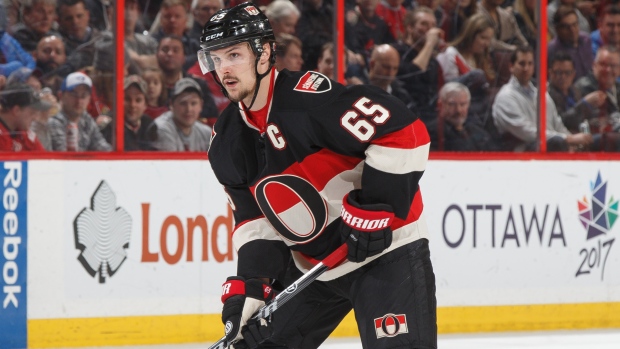 NEW YORK, N.Y. - Ottawa Senators captain Erik Karlsson was announced as one of three finalists for the James Norris Memorial Trophy on Friday as the NHL's top defenceman.

Brent Burns of the San Jose Sharks and Drew Doughty of the Los Angeles Kings are also nominated for the award. The Norris Trophy is awarded "to the defence player who demonstrates throughout the season the greatest all-round ability in the position."

Karlsson is a two-time winner of the Norris Trophy and most recently won it last season.

The 25-year-old scored 16 goals and 66 assists in 82 games this season for the Senators. The Sweden native finished tied for fifth in league scoring and was also the NHL's top-scoring blue liner.

Doughty, of London, Ont., had 37 assists and 51 points in 82 games for the Kings this year. The 26-year-old produced 25 points on the power play and was third in average ice time at 28:01. Doughty also had a career best plus-24 rating and helped Los Angeles finish third in team defence by allowing 2.34 goals against per game.

It's the third time that Doughty has been nominated for the award. He placed second behind Karlsson last season.

The 31-year-old Burns is nominated for the Norris Trophy for the first time. He led the Sharks with 27 goals, 48 assists and 75 points — all team records for a defenceman. The Barrie, Ont., native appeared in all 82 games for San Jose and helped lead them past the Kings in the first round of the Stanley Cup playoffs.

The winner will be announced on June 22 at the NHL awards in Las Vegas.