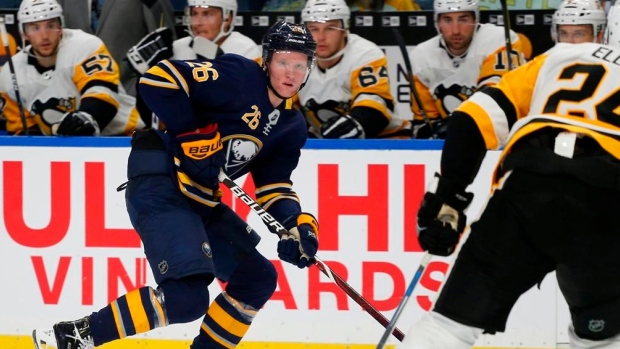 BUFFALO, N.Y. — Rasmus Dahlin nods his head acknowledging he's familiar with the name when Scotty Bowman comes up in conversation. The 18-year-old is then taken aback upon hearing what the Hockey Hall of Fame coach had to say about the rookie defenceman for the Buffalo Sabres.

For all the accolades the Swedish-born player received upon being drafted first overall in June, Dahlin paused briefly upon hearing the nine-time Stanley Cup-winner believes he has the potential to be the best defenceman in Sabres' history.

"Of course that's fun to hear, but I'm just 18-years-old and I have many years in front of me," Dahlin said. "I can't think in that way. I just need to work as hard as I can to be as good as I can."

Moments later, Dahlin noted he still hasn't even made the roster yet.

Perhaps someone in the Sabres' front-office might want to break the good news by informing Dahlin his spot is secure for Buffalo's opener against Boston on Thursday. Bowman had little doubt after watching Dahlin during a prospects tournament earlier this month; Dahlin wowed the 1,800 fans packing the Sabres practice facility by fearlessly jumping into the rush and showing off his play-making abilities with two goals and an assist against New Jersey.

His first goal came after he danced around a defender and snapped a shot through a crowd. The second came on a two-on-one break, during which he raced into the left circle to convert a rebound.

"He'll have some growing pains, but he's got a terrific shot," Bowman told The Associated Press. "He's got what they call a nose for the net. Bobby Orr did that."

Bowman, who spent six-plus seasons coaching in Buffalo, then ran down the list of Sabres' defensive greats, such as current coach and Hall of Famer Phil Housley, Jim Schoenfeld, Jerry Korab and Mike Ramsey.

"He's only 18, but I think in about two to three seasons, if he continues at the same level that he has in Sweden, the Sabres could be looking at a career defenceman," he said.

The Sabres, who haven't made the playoffs in seven seasons and finished last in the standings for the third time in five years, are certainly counting on it.

"We see the potential, too," general manager Jason Botterill said. "The bottom line is, it's our job to develop him."

Dahlin will endure his growing pains, which were evident during preseason games in which he displayed some nerves while also getting accustomed to the smaller North American ice surface. There were occasions in which he was too cavalier with the puck, including being stripped by veteran Patrick Marleau of Toronto last week.

More apparent is how the smooth-skating, no-look-passing youngster can provide a play-making element severely lacking among Buffalo's defencemen a year ago.

Sabres blue-liners combined for a league-worst 19 goals last season. Things were so anemic Buffalo didn't get its first goal from a defenceman until 28 games in, when Jake McCabe scored on Dec. 5.

Dahlin is decisive in breaking out of his own zone. He has an effortless stick-handling ability and he's instinctive in knowing when to join the rush without being reckless.

In the opening seconds of his first shift against New Jersey, Dahlin sped up the neutral zone to accept a pass and create a scoring chance after a Devils turnover.

"He's come in as advertised," Devils GM Ray Shero said. "He has a confidence to his game. He's got a flair to the way he plays."

Botterill went further in saying: "He seems to see everything. It's something that's very difficult to sort of explain, but he certainly has it."

At 6-foot-3 and 186 pounds, Dahlin was regarded as the most NHL-ready prospect in this year's draft class, and drew comparisons to other elite Swedish defencemen, such as San Jose's Erik Karlsson and former Detroit star Nicklas Lidstrom.

Dahlin's first taste of Buffalo came last winter, when the city hosted the World Junior championship. Dahlin helped Sweden win a silver medal and was named the tournament's top defenceman with six assists in seven games. A month later, he represented Sweden at the Winter Olympics, where he had an assist in two games. Dahlin had seven goals and 13 assists in 41 games with Frolunda of the Swedish Hockey League, and earned junior player of the year honours.

Dahlin is soft-spoken, in part because he's still getting a grasp of the English language. As for hockey, he said, it's a game he always wanted to play growing up in Trollhattan, not far from Sweden's west coast.

Though Dahlin makes the game look easy, he said that's far from how it has been.

"I always played with older guys, so it's never been that easy," said Dahlin, who was 16 upon making his Swedish Elite League debut. "It's always been a challenge for me to make the team and stuff like that. I think the challenge makes me motivated."

Now he's on the cusp of playing in the NHL.

"This is my dream," Dahlin said. "And I really want to make the team."