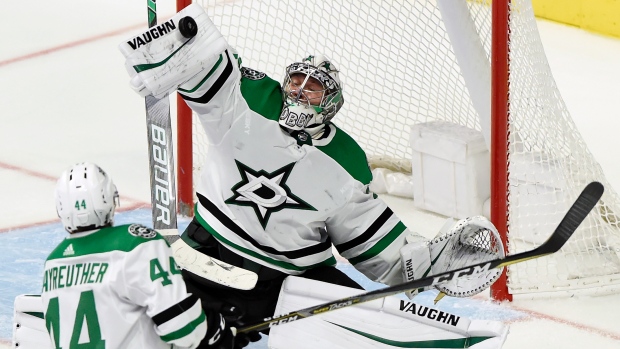 “He reminds me of a guy named Tim Thomas a little bit.”

Those were some of the first words that came to Tyler Seguin after his Dallas Stars won the Clarence S. Campbell Bowl, knocking off the Vegas Golden Knights in just five games in the Western Conference final. He was, of course, referring to Dallas goaltender Anton Khudobin, who has been magnificent all postseason.

Ten years ago, Seguin was a wide-eyed rookie playing for an indomitable Boston Bruins team known for their ability in the defensive zone. They had plenty of skater talent – Milan Lucic, David Krejci, Patrice Bergeron and Zdeno Chara were all in their prime playing years, and more young impact skaters like Seguin and teammate Brad Marchand were waiting in the wings.

But they also had the ultimate eraser in net.

The season put together by Thomas in 2010-11 was one of the best stretches of goaltending in recent history. In 57 regular-season games, Thomas stopped a whopping 93.8 per cent of shots, then followed it up by stopping 94.0 per cent of shots in the postseason. Although he was playing behind arguably the most capable defensive group in the league, he still was erasing plenty of goals that would have been scored against ordinary goaltenders.

During the regular season, we assess he gave up 31 fewer goals than expected. That would be the third highest number in the league, just behind Carolina’s Cam Ward (+33) and New York’s Henrik Lundqvist (+32).

In many ways, Seguin’s comparison is understandable. Khudobin is on a playoff heater – more on this in a moment – that’s really only comparable to a handful of other great performances this past decade. And Dallas similarly has quite a defensive reputation, regarded as one of the best teams at pushing opposing attackers into low-danger areas along the perimeter and protecting the net front.

But Dallas has really had to lean on Khudobin at times this postseason, and that’s where the comparison diverges.

Let’s consider the two goaltenders and their respective postseason runs by the numbers: 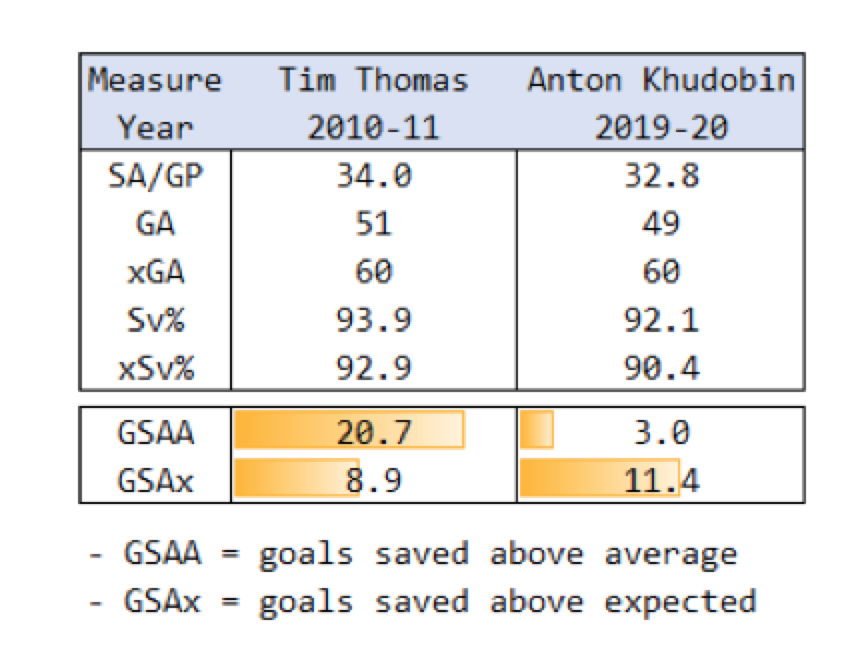 In the modern era of hockey (2007-08 to present), Thomas and Los Angeles’ Jonathan Quick (in the 2011-12 season) carried some of the best postseason save percentages we’ve seen. We know that Thomas was playing behind an elite defensive team that did well at forcing attackers to the outside. We also know that Quick played behind one of the best puck-possession teams we have seen – whereas Thomas was facing around 33 shots on goal per game, similar to what Khudobin has faced this postseason, Quick was at just 26 shots against per game.

Let’s think about these same two measures and compare at a broader scale. I went and grabbed the statistical profiles of 18 playoff goaltenders since the 2007-08 season – those 18 goaltenders ranking no worse than second-best in a respective season by goals saved above average (“GSAA”) and goals saved above expectations (“GSAx”). 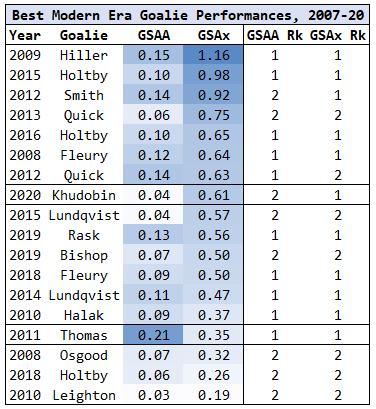 f we think about GSAA as the sheer effectiveness of a goalie to keep pucks out of the net, and GSAx as our barometer for the sheer level of difficulty a goaltender faced in trying to do his job, you can start comparing and contrasting goaltenders. The first thing that jumps out is that Thomas was more effective than Khudobin at keeping pucks out of the net but had a much easier shot profile to work with.

Perhaps the best comparable we have for Khudobin is the player with the nearly identical statistical profile, that being Lundqvist during the 2014-15 Stanley Cup Playoffs. That was the year the Rangers pushed Tampa Bay to seven games in the Eastern Conference final before finally conceding.

Lundqvist was holding the opposition to -0.57 goals less than expected on a per-game basis that postseason, stopping 93.0 per cent of shots in the process. His numbers were impressive because New York’s defence, by and large, was not. Despite the team success, that New York group conceded more high-danger scoring chances than any team not named the Winnipeg Jets, who were unceremoniously swept in the opening round.

At any rate, Seguin’s overarching point is quite accurate: Khudobin’s impact has been so significant you can only compare him to other elite goaltenders who had exceptional postseason runs, like that of Thomas 10 years ago.

Now Khudobin is three wins away from hoisting the Stanley Cup and Conn Smythe Trophy.