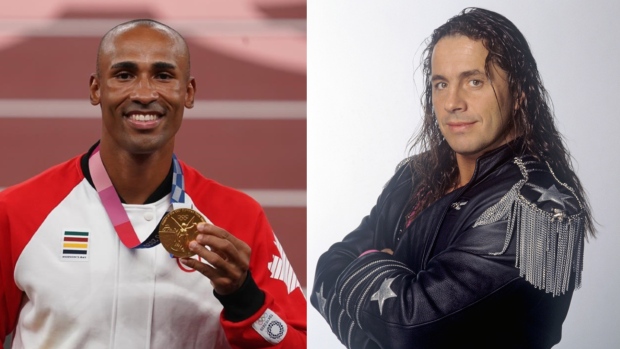 ​Olympic gold-medal winning decathlete Damian Warner of London, Ont., and long-time professional wrestler Bret “The Hitman” Hart of Calgary are among the 2021 inductees to Canada’s Walk of Fame.

Warner is coming off of a remarkable 2021 season. The 32-year-old broke his own Canadian record twice before shattering the Olympic record en route to winning gold at the pandemic-delayed 2020 Tokyo Games in August with a score of 9,018, becoming the fourth decathlete to ever score more than 9,000 points.

Despite his banner year that made him one of Canada’s most beloved athletes, Warner is still getting used to the idea of being celebrated on the Walk of Fame – located in Toronto’s downtown Entertainment District – but is thankful to be mentioned for his accomplishments alongside his fellow inductees, especially Hart, who he was a fan of growing up in London.

“It's a little bit weird in my mind. It's not something that I necessarily thought about but I know it's an incredible honour,” Warner told TSN. “I think it's really cool that I'm going to be inducted alongside all of those great nominees.

“I think for me it's really cool to see Bret Hart because I grew up watching wrestling. I used to play wrestling with a lot of my cousins in a fake WWE wrestling ring with little action figures and we had his action figure. 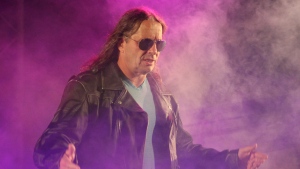 Hart had a 23-year in-ring career with WWE, WCW, and his father Stu’s promotion, Stampede Wrestling, in his native Calgary. The 64-year-old is a five-time WWE Champion, a two-time WCW Heavyweight Champion and has been inducted to the WWE Hall of Fame on two occasions, individually in 2006 and as a member of The Hart Foundation, alongside his brother-in-law, Jim “The Anvil” Neidhart, in 2019.

“Hitman” has been a fan-favourite for wrestling fans for over 40 years but feels especially honoured to be recognized and appreciated by his fellow Canadians and believes the Walk of Fame induction is a higher honour than the many accolades he received as a wrestler.

"I've grown used to being loved by wrestling fans. I've been inducted into the WWE Hall of Fame twice now,” Hart told TSN. “But this is a much deeper, more prideful honour in the sense that it's strictly Canadian.

“I'm proud of what I accomplished as a wrestler but I put this on a little higher ground than that.”

The induction to Canada’s Walk of Fame is a long time coming for Hart, who will finally get his star after years of fans petitioning for his induction. Knowing that fans around the country were so passionate about his induction makes the honour even more special for Hart, who hopes that his legacy will continue to have an impact on Canadians for years to come.

“To hear that [my career] meant a lot to a lot of people, as much as myself. To hear that it was so important to people that they remember you so much even to this day. It gives me a more profound measure of myself,” said Hart. “That what I did, my footprint that I leave on this earth someday will be bigger than I thought. When I say 'The best there is, the best there was, and the best there ever will be,' maybe they'll be saying that 20, 30, 100 years from now. Maybe [they’ll say] that 'no one is better than Bret Hart’, and I hope so.”

Buoyed by support from Canadians across the country, both Warner and Hart hope to use their inductions to the Walk of Fame to continue inspiring the next generation of Canadians.

Hart remains grateful that fans have followed him on his journey and is proud to have been a positive role model for all Canadians, including Warner.

"It just means that everything I did was worthwhile,” Hart said on being an inspiration to Warner. “Every time I would get up early to catch a plane or the sacrifices I made to live that life had a positive impact on somebody else.

“It's been a magical journey and I wouldn't change very much in my life. I'm proud of how I lived my life and what I accomplished. I've never wanted to let anyone down that was a fan of mine. I've always been proud to be a hero and grateful for every fan I've had.”

Warner hopes to live up to the impact made by other Olympic athletes, such as Christine Sinclair, Scott Moir, Tessa Virtue, and Haley Wickenhiser, who have been previously been inducted to the Walk of Fame. 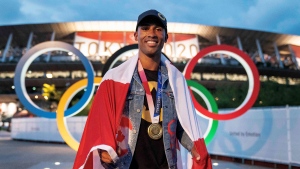 “I think that's why I'm feeling a little weird [about the induction]. These are athletes that I've looked up to for so long and maybe I don't necessarily view myself in that realm,” said Warner. “They're beloved among so many Canadians. Maybe I don't see myself in that way, but it's an incredible honour to be alongside those guys and I just hope to follow in their footsteps and be able to inspire Canadians where I can.”

Warner, who was recently named Canada’s athlete of the year, has also noticed a swelling of interest in the decathlon and hopes to use his new platform to introduce more people to the sport while continuing to represent Canada to the best of his abilities.

“I hope that more Canadians can get involved and experience the decathlon because it's a wonderful event that's changed my life completely, and I think it can have the same impact on a lot of other people,” said Warner. “If it's not the decathlon, at least inspiring Canadians to get active and pursue their dreams.

Warner, Hart, and 13 others, including New York Jets’ offensive lineman Laurent Duvernay-Tardif, will officially be inducted in a ceremony on Friday at 8 pm ET on CTV.