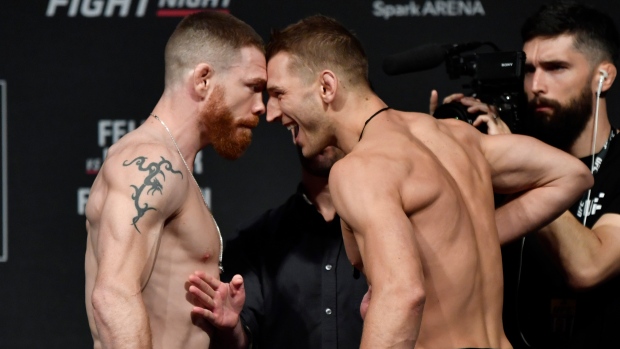 After Dan Hooker stopped Jim Miller with a vicious knee in April of 2018, he turned his attention to Paul Felder, who was conducting the post-fight interview, and challenged him to a fight.

Almost two years later, the lightweights will clash in the main event of Fight Night Auckland on Saturday.

While it could have led to an awkward or contentious moment, for Hooker it was the only way he was planning to go after the fight that he wanted against someone on Felder’s level.

“I knew I wanted a ranked opponent following that fight and I would rather do it face to face,” Hooker told TSN’s Aaron Bronsteter.  “I’d feel like a little bit of a (expletive) going out back and ignoring him and then getting on Twitter and calling someone out, so I’d rather do it to the man standing in front of me.”

Behind Hooker on Saturday at Spark Arena will be stadium full of his fellow New Zealanders as the Auckland native defends home turf; in front of him will be Felder, coming in on a two fight winning streak where he dispatched James Vick and Edson Barboza.

In the buildup to the fight, Hooker took exception to a meme Felder posted on Instagram insulting his last name, a moment that made a respectful matchup turn personal.

“He’s a man of respect, he’s a pretty respectful guy in nature and I thought he crossed that line, that’s something you don’t do,” said Hooker.  “Here in New Zealand you don’t do that, you don’t disrespect someone’s family name and expect nothing to happen.”

Though it might have added a little more juice for Hooker, Felder told MMA Junkie that the main event bout is just business as usual for him.

“I don’t give a (expletive) to be honest with you,” Felder said to MMA Junkie.  “I’m here for one reason, and it’s to put on a fist fight and get that win on Sunday. This whole stuff was fun for me. I was joking around, but I’ve said it one hundred times now: We’re fist fighting. It doesn’t matter if he likes me, he’s going to try and hurt me regardless. It can be whatever it needs to be. It’ll be more fun for the fans this way.”

Hooker comes into the fight on a two-fight winning streak of his own, with victories over James Vick and Al Iaquinta, he’s won six of his last seven bouts.

The 30-year-old has also seen fellow City Kickboxing fighters Alexander Volkanovski and Israel Adesanya become UFC champions in the last year, success that fuels him to push even harder.

“I feel more motivation, more clarity to see that my goals are realistic and very achievable.”