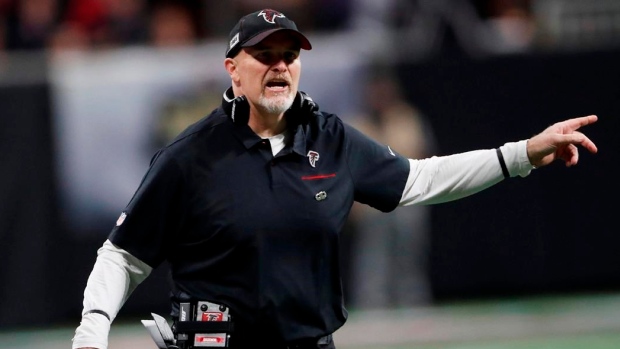 ATLANTA — A meaningless December awaits the Atlanta Falcons for the second straight year, and it’s uncertain how much longer Dan Quinn will coach the team.

Last year’s collapse was blamed mostly on injuries, but this year's 3-9 record and early elimination from the playoffs seem mainly the fault of Quinn and general manager Thomas Dimitroff.

Quinn will finish with a non-winning record for the third time in his five seasons. He led Atlanta to the Super Bowl in 2016 and coached them to the divisional round of the playoffs the following year, but it has since been a bumpy ride. A 26-18 loss Thursday to New Orleans put the Falcons, considered one of the NFC’s more talented teams at the start of the season, alongside Cincinnati and Detroit as the only NFC clubs out of playoff contention in November.

Dimitroff has held his job since 2008, the year Atlanta drafted quarterback Matt Ryan No. 3 overall. There are some considerable strikes against him. He has largely struggled build a consistently dependable offensive line and has rarely had good luck with cornerbacks in the draft. A lucrative contract given three years ago to oft-injured Devonta Freeman, making him the NFL’s highest paid running back at the time, is a drag on the salary cap.

Only owner Arthur Blank knows what’s next, but it seems improbable that Quinn and Dimitroff will be entrusted with another season. Blank likely doesn’t want Ryan, who turns 35 next year, and star receiver Julio Jones, who will be 31, to get much older without hope of a new direction for the franchise.

Ryan leads the NFL in completions through the first three games of Week 13, but he’s also first in sacks. Given enough time in the pocket, Ryan is still an elite passer. He’s excellent at reading pre-snap alignments and checking down to find the best receiving option. The problem is Ryan plays behind a weak offensive line and is often under siege even in a shotgun formation.

The Falcons have struggled to create a pass rush except when they won consecutive road games at New Orleans and Carolina. They reverted to form the last two weeks, recording no sacks against Tampa Bay and the Saints. Atlanta had one quarterback hit on Thursday.

With Jones injured and unable to suit up, Calvin Ridley took over as the Falcons’ No. 1 receiver and finished with eight catches for 91 yards. Ridley made a couple of difficult, leaping grabs against tight coverage.

Rookie Kaleb McGary spent a long night in Cameron Jordan’s turnstile, getting turned around too often by the Saints’ standout pass rusher, who had four of New Orleans’ nine sacks. McGary, a late first-round pick, has taken some lumps this year, but this might have been the toughest lesson yet.

Jones has a shoulder injury and missed his first game in three years. It’s too early to know if he’ll be back for next week’s home game against Carolina. Right guard James Carpenter left the game with a concussion in the first half and likely will be out.

84 — Atlanta’s point differential in first halves this season. The Falcons trailed the Saints 17-9 entering the third quarter and couldn’t do enough to overcome another deficit.

As for Quinn, he has no choice but to forge ahead as if all is normal.

“It’s always about playing our best to go win,” he said in a conference call with reporters on Friday. “That's the first priority. That's the first consideration. But I've certainly learned a hell of a lot this year, more than any year, and we're going to continue to push and go for it like crazy.”