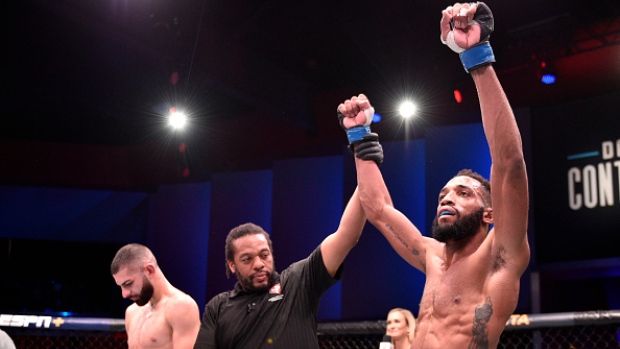 The ninth episode of Dana White's Contender Series featured a familiar face as well as a familiar name to those who follow the UFC.

The opening fight featured undefeated Ricky Steele, who suffered a bad injury when he was a contestant on The Ultimate Fighter and is fighting for the first time since then and the main event features Leon Shahbazyan, the older brother of Edmen Shahbazyan, an alumni of the show who has had success in the UFC.

The first bout of the evening featured undefeated bantamweights Steele and Phil Caracappa who had a back and forth, mostly striking-based battle.

Steele showcased his karate background and tried to fight from distance whenever possible, while Caracappa aimed to close that distance.

Ultimately, it was Steele who had the most success and earned a split decision victory.

The first two rounds were all Martin, who bested di Segni in the grappling and striking and looked to be the far superior fighter.

In the third round, di Segni pressed the action quite a bit, but it was not enough to earn the win as Martin earned a unanimous decision victory.

Prior to the event, Garcia missed weight by 3.5 lbs (139.5 lbs) and looked to be the much bigger fighter.

His size paid off as he was able to bully Torres, getting the better of striking exchanges, which led to a TKO stoppage late in the first round.

While it was the most exciting result of the evening up until that point, it was unclear whether missing weight would prevent Garcia from earning a contract.

This fight was a striking exhibition for Pogues, who landed the more powerful shots throughout and was able to outmuscle Brigagao on the feet and on the ground after mixing in takedowns as part of his attack.

Of the three decisions up until this point, this one was the most dominant and most entertaining performance of the night.

Pogues looked destined to earn a UFC contract after an incredible display and at age 23, he looks to be brimming with upside.

In the main event, Shahbazyan took on Philip Rowe, a training partner of Mike Perry.

The first round was very successful for Shahbazyan, who dropped Rowe, pursued the finish, but was unable to score it.

The second round was the total opposite. Rowe utilized his reach and unleashed a barrage against Shahbazyan, who attempted a takedown and ended up on bottom.

Towards the end of the round, Rowe threw multiple hammer fists to his grounded opponent and nearly got the stoppage, but Shahbazyan was saved by the bell.

To open the third, Rowe picked up from where he left off. He immediately tagged Shahbazyan and then hit him with a flurry of big punches to score the finish 15 seconds into the round.

My two contract selections: If I had only two contracts to give out, I’d award them to Ricky Steele and Jamal Pogues.

Steele faced very tough opposition and looked good, despite only getting a split decision win.

Pogues looks like he has a ton of upside given his age and how he absolutely manhandled his undefeated opponent.

Dana White’s contract selections: White awarded a contract to just one fighter and it was Philip Rowe

Highest ceiling: This is an easy one. Pogues is 23 years of age has powerful striking, good grappling and will only get better.